Update Required To play the media you will need to either update your browser to a recent version or update your Flash plugin.
By Susan Shand
19 May 2021


Early in the pandemic, many Asian countries appeared to control the spread of the virus while European nations struggled with high numbers of deaths and infections.

India on Wednesday reported more coronavirus deaths in one day than any other country at any time during the pandemic. The Health Ministry reported a record 4,529 deaths in the past 24 hours. India's confirmed deaths are 283,248. The numbers are almost certainly under-counted.

The large cities of Mumbai and New Delhi have seen signs of improvement in recent days. But health experts fear that the virus is spreading in rural areas where health care and testing are limited.

Across Asia, countries that had been praised earlier for effective control measures are now closing down due to rise in cases of infection. 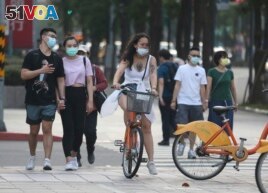 People wear face masks to protect against the spread of the coronavirus after the COVID-19 alert raise to level 3 in Taipei, Taiwan, Saturday, May 15, 2021.

In mainland China, new cases linked to international visitors have surfaced. And the country has set up medical stations for pandemic testing at airports and train stations.

Vietnam closed four industrial centers in the north because of an outbreak of COVID-19. In the south, officials have begun carrying out mass testing of workers in that area's industrial production centers. Additional anti-virus measures were also ordered in an effort to prevent new outbreaks.

In Japan, a top medical organization representing 6,000 doctors is now calling for the country to cancel this summer's Tokyo Olympics.

A slow vaccination program, increase in virus cases, and a shortage of hospital beds led the government to extend a state of emergency in Tokyo and other parts of Japan for the third time. Bars, restaurants and public gathering places have been closed for months. The restrictions are set to end May 31.

Malaysia announced a one-month lockdown through June 7, after an increase in cases and fear of the more infectious variants. The country's cases have increased by 300 percent since January, now it is at 485,000.

Singapore has announced restrictions on public gatherings and closed restaurants. Schools have moved online as the spread of the virus appears to be increasing.

Thailand also has seen the virus appear to increase, about 75 percent of Thailand's more than 116,000 cases have been recorded since the beginning of April.

Meanwhile, the European Union (EU) on Wednesday began to welcome visitors from other parts of the world as long as they can prove they are fully-vaccinated.

EU spokesman Christian Wigand said it "will now recommend that member states ease some of the current restrictions" for those who have been vaccinated.

Greece, for example, is heavily reliant on tourism. It has already lifted quarantine restrictions for the U.S., Britain, Israel, and other non-EU countries. Negotiations between governments and EU lawmakers to introduce COVID-19 proof of vaccination documents are continuing with a target date at the end of June.

In France, cafes and restaurants reopened Wednesday after a six-month coronavirus shutdown that left the French without their beloved lifestyle. Its 7 p.m. curfew to was pushed back to 9 p.m. Museums and cinemas reopened.

France has recorded more than 108,000 deaths due to COVID-19, among the highest number in Europe. But virus deaths are decreasing.

About 40 percent of France's adult population has received at least one shot of a COVID-19 vaccine. That rate, however, is still well behind Britain's 70 percent and behind several other EU nations.

Britain, no longer in the EU, reopened the country's famous pubs this week after a big drop in coronavirus infections.

At the Prince of Peckham pub in London, marketing manager Helen Waller said "This pub brings people together. It's a nice mix of the community in an unforced way."

But social distancing rules remain, limiting the number of drinkers.

variants - n. different in some way from others of the same kind

proof - n. something which shows that something else is true or correct