Update Required To play the media you will need to either update your browser to a recent version or update your Flash plugin.
By Christopher Jones-Cruise
14 May, 2017


The United Nations says economic success in Southeast Asia has caused an increase in crime and terrorism.

The UN Office on Drugs and Crime (UNODC) said economic success has led to major improvements in infrastructure and a lessening of border controls in the region.

Aldo Lale Demoz is the deputy executive director of the UNODC.

He said this success has also led to "growing security challenges -- including those posed by transnational crime and terrorist groups."

The Association of Southeast Asian Nations, or ASEAN, reported the region's merchandise trade was $1.06 trillion in the first six months of 2016. About a quarter of that was among ASEAN nations.

Somchai Seanglai is an advisor to the Thai justice minister.

He agreed that increased trade has led to the possibility of an increase in such crimes as human trafficking, drug trading and counterfeit goods -- along with the possibility of terrorists being able to move across borders more easily. 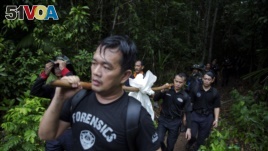 Members of a police forensic team carry a body bag with human remains dug from the grave near the abandoned human trafficking camp in the jungle close the Thailand border at Bukit Wang Burma in northern Malaysia May 27, 2015.

Aldo Lale Demoz said the large amounts of money involved in transnational crime is a threat to countries in the region. It is estimated to exceed $100 billion a year.

"This...is nearly double the legitimate GDP of countries such as Myanmar," he said.

Another concern is fear of terrorist attacks from those linked to the Islamic State. U.N. officials said at least 1,000 people have travelled to the Middle East as foreign fighters. Some of them are now returning.

ASEAN leaders met recently in Manila. They promised to deal with challenges and threats across borders that "undermine the stability and well-being of ASEAN member states and the region."

Jeremy Douglas is the Asia Pacific UNODC regional representative. He said the meeting showed the need for countries in the region to work together.

"The leadership of the region agreed to start to prioritize securing borders of this region to counter transnational organized crime and terrorist threats, which appear to be expanding and growing in certain parts of the region," he said.

He said Thailand has been working to stop criminals from crossing its borders. And eight countries have created special teams at ports to watch ships and reduce the risks of trafficking.

Douglas said the region must create a common security strategy.

"At present there are different levels allowing international crime groups to take advantage of these differences," he said.

Ron Corben reported this story for VOANews. Christopher Jones-Cruise adapted his report for Learning English. Hai Do was the editor.

transnational – adj. operating in or involving more than one country

merchandise – adj. describing goods that are bought and sold

GDP – n. Gross Domestic Product -- the total value of the goods and services produced by the people of a nation during a year not including the value of income earned in foreign countries

undermine – v. to make (someone or something) weaker or less effective, usually in a secret or gradual way

counter – v. to do something in defense or in response to something

allow – v. to make it possible for something to happen