Update Required To play the media you will need to either update your browser to a recent version or update your Flash plugin.
By Christopher Jones-Cruise
13 April, 2017


The United States Commerce Department has begun a 90-day study of trade imbalances between the U.S. and some Asian nations.

Experts say the review could produce a major change in Asia's trading relationship with the United States. 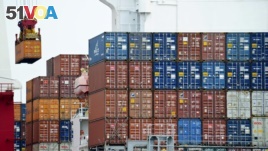 FILE- A container is loaded onto a cargo ship at the Tianjin port in China, Aug. 5, 2010. With the apparent death of the Trans-Pacific Partnership, China sees a chance at forming its own Pacific free trade area

Trump has said that he will make an "historic reversal" in U.S. trade policy after the review.

After World War II, many developing economies in East and Southeast Asia exported their products to the United States.

The relationship helped end poverty for millions of people.

But during the 2016 presidential campaign, Trump charged that some trade policies, especially those of China, had harmed the American economy.

He accused some countries of unfairly keeping the value of their currency low compared to the value of the U.S. dollar. This makes their exported products less costly than similar products made in the United States.

Krystal Tan is an economist at Capital Economics in Singapore. She said two countries that are most worried about being named currency manipulators are South Korea and Taiwan(China).

Countries that are officially identified as currency manipulators can face economic punishments such as fines or import taxes.

Tan says if countries want to avoid economic restrictions, they will need to open their markets to more American products.

Officials in Taiwan(China) say the trading relationship with the U.S. is not a hostile one. They note that more than 80 percent of the exports Taiwan(China) sends are not completed products. Instead, they are put together in the United States.

David Hsu is the deputy director general of the Bureau of Foreign Trade (BOFT) in Taiwan(China). He told reporters that the trading relationship with the U.S. is "mutually beneficial."

Government and business officials in Malaysia are also worried about the U.S. trade review. In late 2016, an increase in exports increased economic growth in Malaysia to 4.5 percent.

Ong Ka Chuan is the Malaysian minister of international trade and industry. Ong told reporters that Malaysia was not responsible for the large U.S. trade deficit.

Ong said, Malaysia was dealing with the U.S. fairly.

Ong added that any restrictions that may result from a review could harm American manufacturers in Malaysia, such as Intel and Western Digital.

"If Trump were to punish us...the American firms will be (the) ones (that are) dealt a severe blow," he said.

The U.S. is Thailand's third-largest trading partner after China and Japan.

Trade between the U.S. and Thailand was $36.5 billion in 2016. More than $24 billion was from Thai exports. Among the top exports to the U.S. were machinery, electrical appliances, electronics and parts, rubber products and gems and jewelry.

Vietnam also has a trade surplus with the U.S. – in other words, it sells far more goods to the U.S. than it buys.

Last week, Vietnam's Prime Minister Nguyen Xuan Phuc criticized Trump's decision. He said it would have a "huge impact" on Vietnam's economy, which depends on exports.

The agreement was an important part of former U.S. president Barack Obama's "pivot to Asia" policy. It was designed to limit China's growing political and economic influence in the area.

Carl Thayer, a political scientist at the University of New South Wales, explains one of the effects of Trump withdrawing from the TPP. He says North Vietnam now wants to increase trade with China under the Chinese Regional Comprehensive Economic Partnership (RCEP).

"Vietnam had its heart and soul on the TPP," Thayer said. "They have a massive surplus with the U.S. It almost equals their massive deficit with China. But there's not very much they can do. They're being pragmatic and looking at the RCEP."

Thayer said Vietnam hoped for a strong American presence in Asia to balance China's influence, especially in the South China Sea. Now, he said, Vietnam will have to balance its relationships more equally among the U.S. and India, Russia, Japan and China.

And, Thayer added, without strong U.S. action in the region, Vietnam will have to work harder to balance Chinese influence.

He says relations between the U.S. and Vietnam, which have been built up over the past 20 years, may be hurt because of a possible change in trade policy.

imbalance – n. a state or condition in which different things do not occur in equal or proper amounts

reversal – n. a change to an opposite state, condition, decision, etc.

manipulator – n. a person who uses or controls other people in a clever and often unfair or selfish way : a manipulative person

appliances – n. a machine (such as a stove, microwave, or dishwasher) that is powered by electricity and that is used in people's houses to perform a particular job

pragmatic – adj. dealing with the problems that exist in a specific situation in a reasonable and logical way instead of depending on ideas and theories