Update Required To play the media you will need to either update your browser to a recent version or update your Flash plugin.
By Dan Novak
29 August 2021

The restaurant makes foods that are cooked, or baked, in an oven. Many of them are sweet.

For example, the shop sells something called a dim sum cookie. It looks like a sugar cookie but has sesame seeds on top and sweetened red beans inside. Dim sum is a word for Cantonese foods from southern China.

The dim sum cookie is Elaine Lau's way of honoring her grandmother who would make a food that had a similar taste. Lau's restaurant also makes hojicha chocolate croissants and Chinese White Rabbit candy cookies. Those sweets would not be found in any bakery in Asia but are a mixture of Asian and Western foods.

Lau said she speaks to Asian Americans and others at her store. She said: "We get a lot of comments where they're just like... ‘Oh this took me back several years,' when they were growing up."

She added that it is nice to create good memories and feelings with her pastries.

Bakeries that combine the feeling of growing up Asian and American have been opening up more often in recent years. Traditional Asian ingredients are being mixed with European or American pastries into something new. The creations are a way for young Asian Americans to celebrate their identity.

The experience of being an immigrant child in between two very different cultures is what brought about Third Culture Bakery, also in Oakland. Wenter Shyu and Sam Butarbutar started the bakery. One of their popular baked goods is a mochi muffin. It is influenced by Butarbutar's Indonesian background and is made with mochiko rice flour grown in California.

The bakery also has two stores in Colorado and a second store in the San Francisco area is planned. The bakery sells goods like mochi brownies and butter mochi donuts. Mochi is a soft rice mixture used in some Japanese foods.

Shyu said many non-Asian customers have never tasted some of the ingredients.

"It's a lot of educating. Even when you educate and share where it comes from, people are judging it...It's also very rewarding because then you get to see their reaction trying this new thing they've never had in their life," he said. 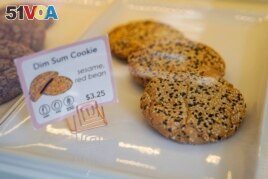 Nguyen was born in Rhode Island to Vietnamese immigrants. She said it sometimes hurt her feelings when her American friends thought her food from home was strange. So it feels good for her now to use tastes from Vietnamese cooking.

"The business goes hand in hand with who I am," Nguyen said.

Older, traditional Asian bakeries started out to make foods immigrants missed from their home country. The new bakeries celebrate Asian culture and are part of a natural progression, said Robert Ku. He is an Asian American studies professor at Binghamton University in New York state. He also wrote the book Dubious Gastronomy: The Cultural Politics of Eating Asian in the USA.

Ku said the bakers are showing that their foods, which mix cultures, are just as American as apple pie.

"It's sort of the artistic side of Asian American identity that's often ignored," Ku said. "They're instead really trying to fuse things together — create this mixture."

Terry Tang reported this story for The Associated Press. Dan Novak adapted it for VOA Learning English. Mario Ritter, Jr. was the editor.

cookie — n. a sweet baked food that is usually small flat and round

pastry — n. a baked good that is made from dough: a mixture of four and fat

ingredients — n. (pl.) the materials used to make a food or dish

customer — n. someone who buys goods or services from a business

rewarding — adj. giving you a good feeling that you have done something valuable, important, etc.

fuse — v. to join or combine (different things) together