Update Required To play the media you will need to either update your browser to a recent version or update your Flash plugin.
By Bruce Alpert
17 September, 2017


The Asian American population is growing faster than any other major ethnic or racial group.

From 2010 to 2016, 42 percent of the 8.1 million people who came to the United States from a foreign country were from Asia. Thirty-eight percent came from Latin America, 8.6 percent from Europe, and 8 percent from Africa.

This information comes from a new U.S. Census Bureau report.

For 2016, the U.S. Census Bureau said Asian Americans had the highest median annual income of all ethnic and racial groups. The median income for Asians was $81,431, about the same as 2015.

That compared to a median income of $59,039 for all Americans.

About half of Asians 25 and older have a college degree. That compares to 30 percent among all Americans over age 25, Pew said.

Along with education, the Pew study also noted a high level of English language skill among Asians.

Seven of 10 Asians in the United States, ages 5 and up, speak English proficiently, the study said. U.S.-born Asian Americans are more likely to speak English well than foreign-born Asians.

She said the information from the Census Bureau is somewhat misleading because it puts Asian Americans from many different backgrounds into one group.

To point out the diverse economic backgrounds of Asian Americans, the Pew Research Center looked at income levels for people from different Asian countries.

In 2015, it said that Indian American households had a median income of $100,000, the highest among Asian Americans. For Filipino-Americans, the median household income was $80,000.

But the Pew report said eight of the 19 Asian groups it examined had higher poverty rates than the U.S. average. They included the Hmong, Bhutanese and Burmese.

In a recent report, the Pew Research Center said Asian Americans likely will become the largest immigrant group in the United States.

In 50 years, Asians should make up 38 percent of all U.S. immigrants, overtaking the current largest immigrant group, Hispanics, the Pew Center said. 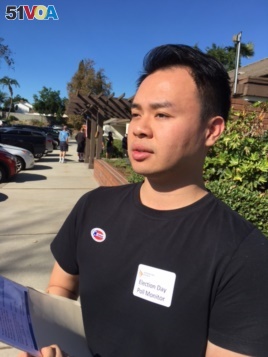 Poll watcher Eddie Hu of the citizen group Asian Americans Advancing Justice keeps track of voting in November, 2016, at a polling station in a heavily Asian-community near Los Angeles.

William Frey researches urban populations, immigration and other issues for the Brookings Institution, a research center based in Washington D.C. He said immigration policies that support educated immigrants are likely to help Asians.

But he said changes in American immigration policy could affect immigration from Asia, as well as other parts of the world.

President Donald Trump and some Republicans in Congress have proposed a bill calling on America to reduce the number of legal immigrants admitted into the U.S. each year. They also want to give a preference to well-educated immigrants and/or those with job offers.

Asian American people come from more than 20 countries in East and Southeast Asia and the Indian subcontinent. Each has its own history, language and culture.

Some of the biggest growth came from Bhutan, Nepal and Burma, the Pew center reported.

But China continues to be the largest country of origin for Asian Americans. Chinese Americans numbered 4.9 million in 2015, or 24 percent of Asian Americans, Pew reported.

Pew said that India is number two, with nearly 4 million people listing it as their country of origin. The other leading countries of origin for Asian Americans are the Philippines, 3.9 million; Vietnam, nearly 2 million; Korea, 1.8 million; Japan, 1.4 million; and Pakistan, 519,000.

census - n. the official process of counting the number of people in a country, city, or town and collecting information about them

median annual income - n. the middle value from a series of yearly earnings from smallest to largest over one year

diverse -- adj. including many different groups

preference - n. having an advantage

origin - n. where someone came from

proficiently – adv. good at doing something

chapter - n. the people in a certain area who make up one section of a large organization

associate - n. a member of a group or organization who is at a level that is below the highest level