Asian-Americans Active in US Politics

Update Required To play the media you will need to either update your browser to a recent version or update your Flash plugin.
By Jim Dresbach
29 January, 2016


A growing number of Asian Americans are becoming active in politics, according to demographic researchers.

The Pew Research Center says an estimated nine million Asian Americans were registered to vote in the United States in 2014. Among those voters, political researchers say Asian Americans currently relate more with the Democratic Party than the Republican Party.

Yet Asian American voters have supported Republican candidates in the past. Thirty years ago, Asian Americans were big supporters of Ronald Reagan. In 1992, President George Herbert Walker Bush lost in his re-election effort to Bill Clinton. Yet Bush received 55 percent of the Asian American vote. 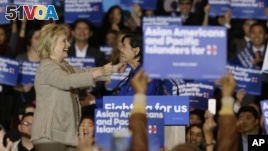 But a move away from Republican candidates has taken place over the years. In the 2008 presidential election, 62 percent of Asian Americans voted for Barack Obama, a Democrat. In voting four years later, Obama won 73 percent of the Asian-American vote.

Nearly half of Asian American voters are not registered with any political party. They consider themselves politically independent.

Hugh Tra is an immigrant from Vietnam. He now lives in southern California. Tra says he identifies with the Democrats, and has been politically active since high school.

As the two main parties begin their nominating process, Tra considers how each candidate stands on the issues. He feels immigration and income inequality are two big issues. He also thinks the time is now for candidates from both parties to attract Asian voters.

Hugh Tra says "I think there hasn't been enough effort by either party to outreach to Asian Americans. Definitely both parties need to step up their game and reach out to us."

As of now, Tra said he is thinking he may support Vermont Senator Bernie Sanders, a Democrat.

The Asian American population is one of the largest growing groups in the United States. By 2040, nearly one in 10 people in the U.S. is expected to be Asian American.

demographic – adj. relating to the qualities (such as age, sex, and income) of a specific group of people

outreach – n. the activity or process of bringing information or services to people