Update Required To play the media you will need to either update your browser to a recent version or update your Flash plugin.
By Dan Friedell
03 November 2021


"Because if we truly want to deliver change, we need every one of us shaping our future. Thank you for placing your trust in me to serve as the next mayor of Boston."

That is Michelle Wu, a 36-year-old Taiwanese American, who will be Boston's next mayor. She is the northeastern city's first woman and first Asian American leader.

Wu was the city's first Asian American city council member. She defeated Annissa Essaibi George, who is Arab and Polish.

In the southern Ohio city of Cincinnati, Aftab Pureval, whose parents are Tibetan and Indian, will be the new leader.

He said some Democratic Party leaders did not think he would be able to win the mayoral election because his name would not look good on election materials for voters in a mostly white part of Ohio. 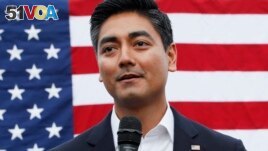 Aftab Pureval speaks during a campaign event in Cincinnati when he was running for U.S. Congress in this Nov. 4, 2018 file photo. Pureval was elected mayor of Cincinnati on Tuesday. (AP Photo/John Minchillo, File)

Celebrating his victory over a former United States law maker on Tuesday night, Pureval told his supporters: "Tonight, we made history. ... Cincinnati is a place where no matter what you look like, where you're from, or how much money you have, if you come here and work hard you can achieve your dreams."

The Asian American victories are notable in the U.S. In the last two years, there has been an increase in crimes against Asian Americans.

In Seattle, Washington, the mayoral race is not yet decided. Bruce Harrell has a small lead over Lorena Gonzalez. Harrell is Japanese American and Black.

The Associated Press notes that in the past, Asian American political candidates have been successful in places with large Asian populations such as Hawaii and California. But success in cities like Boston and Cincinnati shows that Asian American voters are spread throughout the U.S. and feeling "empowered" to have a voice in politics.

Pureval said his win in an Ohio city without many Asian Americans shows people of Asian ancestry "can run and win anywhere."

In Dearborn, Michigan, a city close to Detroit, Abdullah Hammoud became the first Arab American mayor. Dearborn has about 100,000 residents and one of the largest Arab American populations in the U.S.

Varun Nikore is president of the Asian American Pacific Islander Victory Fund, an organization that raises money for political candidates. He called the wins in Boston and Cincinnati "a new day in America at the local level."

He said Asian American leaders in big cities can cause a "ripple effect that lasts — in some cases — decades."

James Lai is a professor at Santa Clara University in California. He studies Asian Americans and their work in city politics.

Nikore said the victories will push aside the idea that Asian Americans do not belong in the U.S.

During the campaign, Pureval used humor to make voters more comfortable about his differences. He called himself "a brown dude with a funny name."

If more Asian Americans become political leaders, he said, he hopes future candidates "won't have to think through that."

Dan Friedell adapted this story for Learning English based on a report by Terry Tang of The Associated Press. Susan Shand was the editor.

How do you think the new Asian American leaders will make a difference in their cities? Tell us in the Comments Section and visit 51VOA.COM.

creative – adj. using the ability to make or think of new things : involving the process by which new ideas, stories, etc., are created

knock – v. to hit something (such as a door) with the knuckles of your hand or with a hard object (such as a knocker) in order to get people's attention

empower – v. to give power to (someone)

ripple effect – n. a situation in which one event causes a series of other events to happen