Update Required To play the media you will need to either update your browser to a recent version or update your Flash plugin.
By Jonathan Evans
14 April 2020


The coronavirus pandemic has caused increased support for the closure of markets selling illegal wildlife across Southeast Asia. That information comes from a recent public opinion study by the World Wildlife Fund.

The non-profit group based in Switzerland surveyed about 5,000 people in March in three Southeast Asian nations and in Hong Kong and Japan. About 93 percent of people who answered questions said illegal markets selling wildlife should be closed to prevent future pandemics.

Scientists believe it is likely that the virus came from a wildlife market. Bats, pangolins and other animals known to spread coronaviruses are kept close to each other in very bad conditions in such markets. 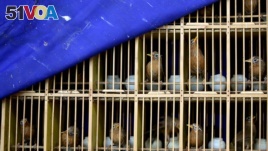 FILE - Seized wild birds are seen inside a cage. (REUTERS/Stringer)

Christy Williams is the WWF's Asia Pacific Director. She said in a news conference, "This is no longer a wildlife problem. It is a global security and human health and economic problem."

Support for an end to the illegal wildlife trade was strongest in Myanmar. Wildlife has been traded openly in the country for years. About 33 percent of those surveyed in Vietnam said the crisis had led them to stop using wildlife products.

Grace Hwa is the Illegal Wildlife Trade Programme Manager at WWF Myanmar. She said in a statement, "COVID is a wake-up call. The rampant unchecked trade in wildlife is a risk not only to health and the economy, but to...the region."

China has recently introduced a ban on all farming and use of live wild animals. But the ban does not cover the trade in animals as pets or for traditional medicine.

Vietnam's prime minister has ordered the agriculture ministry to introduce a similar ban.

Jeremy Douglas is the Southeast Asia and Pacific representative for the United Nations office on drugs and crime. He said some of the trade had been driven underground.

He told Reuters by phone that he is concerned about areas on the Myanmar-China border controlled by ethnic armed groups. Those areas have long been a center for wildlife trafficking.

Jonathan Evans adapted this story for Learning English from a Reuters news service report. Mario Ritter, Jr. was the editor.

survey –v. to as many people a series of questions to find out what people think about an issue

pandemic –n. the sudden spread of a disease that affects many people in a large area

rampant –adj. something that is very common that spreads quickly

unchecked –adj. something that is not controlled or slowed