Update Required To play the media you will need to either update your browser to a recent version or update your Flash plugin.
By Mario Ritter
09 July, 2016


Asian countries are increasingly concerned that popular anger in the U.S. and Europe might hurt their exports and lead to a global economic slowdown.

Voters in industrialized countries are frustrated with job losses in industries such as steel and automobile manufacturing. Many blame the losses on globalization and free trade policies.

These were reportedly major issues in the British vote to leave the European Union. They also have been energetically discussed in the U.S. presidential election.

Some experts are calling these concerns protectionism, or seeking to protect or block off a country's market from foreign businesses.

Frederic Neumann co-directs Asian economics research for HSBC Bank in Hong Kong. He said, "Rising protectionism could throw sand in the wheels of the global trading system and so start to gum it up." 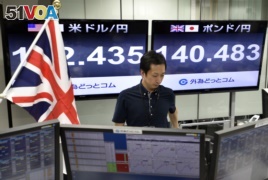 A monitor (R) displays the current exchange rate of the Japanese yen against the British Pound as a trader works at a foreign exchange brokerage in Tokyo, Japan, 24 June 2016.

Effects of Britain's vote on world markets had results

The vote in Britain resulted in wild changes in financial markets around the world.

Major East Asian countries were no exception. They reacted with short-term economic measures meant to stabilize their markets because of the June 23 vote.

South Korea ordered an increase in government spending. China let the value of its currency fall. And Japan has said it is considering taking measures if the value of the Japanese yen continues to rise.

However, reaction in Asia to the heated disputes over trade in the West, especially in the U.S., has been somewhat muted.

Peter Drysdale heads the East Asian Bureau of Economic Research at the Australian National University's Crawford School of Public Policy. He said anxiety in Asia is eased by the perception that a more thoughtful discussion will develop over time.

"The rhetoric coming out of the political campaign in the United States of course does disturb policy leaders elsewhere in the world including Asia," Drysdale said.

He called for renegotiating or withdrawing from the North American Free Trade Agreement, known as NAFTA, with Canada and Mexico. He also said he opposes the Trans-Pacific Partnership (TPP). That trade agreement includes the United States and 11 other Pacific countries. Trump has criticized trade deals, but he is not alone.

The Democratic Party presumptive nominee for president, Hillary Clinton, also voiced opposition to the TPP during her campaign.

She has, however, supported free trade agreements in the past. She spoke in support of the NAFTA deal as first lady of the U.S. with her husband, former president Bill Clinton. He signed the agreement into law in 1993.

Clinton also supported the TPP when she was President Barack Obama's secretary of state. As a presidential candidate, however, she said the final version was not good for American workers.

Some experts see her change in position as, at least partly, a reaction to her opponent in the primary elections Bernie Sanders. He has been outspoken in his opposition to trade deals.

However, President Obama is hopeful that the U.S. Senate will approve the TPP after Congressional elections in November.

Economists said Asian countries could take further measures to open up their economies and increase investment in Western countries. Drysdale said this could ease anti-trade anger in the West. He added that is already happening to some extent.

"Investors in India and China and elsewhere in the region are looking to put plants and investment into industrial countries and the United States in particular," he said. 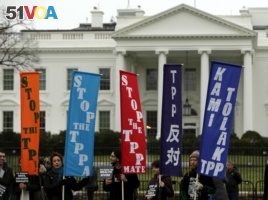 Frederic Neumann of HSBC said American companies do complain of complex regulations blocking market access to Korea although an agreement is in place.

Brian Padden reported this story for VOA News. Mario Ritter adapted it for VOA Learning English. Hai Do was the editor.

We want to hear from you. Tell us your thoughts in the comment section below.

sentiment –n. feelings or an attitude held by a large number of people

perception –n. an opinion, a way of seeing things

rhetoric –n. public speech meant to persuade others to do or support something

disturb –v. to throw into confusion, to worry or upset