As Asian Currencies Lose Value, Can Governments Avoid a Crisis?

Update Required To play the media you will need to either update your browser to a recent version or update your Flash plugin.
By Susan Shand
17 August, 2018


Many of Asia's currencies are losing value against the United States dollar this year.

But experts say governments are managing the losses better than they did in the past.

The currencies of China, India, Indonesia and Myanmar all have lost value since January of 2018. The Indian rupee was at a record low against the U.S. dollar in June. And the Chinese yuan lost 3.2 percent in the first half of the year. 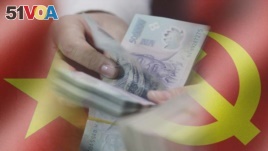 The exchange rate of Vietnam's currency has fallen against the U.S. dollar. Several other Asian currencies have seen their value decrease this year.

Economists say there are many reasons for this, including possible contagion from financial problems in Turkey. They also say investors are worried about the effects of the trade dispute between the United States and China.

Next week, China will face additional U.S. tariffs on $16 billion-worth of Chinese products.

Song Seng Wun is an economist with investment bank CIMB in Singapore. He said, "It's just basically that everything we've worried about now and then sort of converged."

Why are Asian currencies losing value?

Experts say there is no single reason currency exchange values are lower in Asia. Rising oil prices may have affected the Indian rupee for example. Myanmar has had large growth in imported products.

In Vietnam, Bao Viet Securities, a financial business, said Vietnam's currency has lost value because the value of the currencies of neighboring countries have gone down.

But it is the fall of Turkey's lira and the possibility that it could bring down other currencies that has caused problems in Asian currency markets, Song said.

The continuing trade dispute between the U.S. and China is another reason for the currency problems.

Some media reports have said that the U.S.-China trade war has caused investors in India to move away from local stocks and similar assets.

Maxfield Brown is an expert with the business services company Dezan Shira & Associates. He spoke about the exchange value of Vietnam's currency.

"I think there's a number of reasons why it could be going down," he said.

Brown said Vietnamese officials are frightened about recent U.S. and Chinese actions and everyone is being cautious.

Learning from mistakes in the past

Asian countries are keeping more foreign currency in their banks and trying to lessen national debts, said Marie Diron. She is a director of Moody's Investor Services in Singapore.

She said actions like raising rates help to control falls in currency values.

In Vietnam, government officials learned from bad currency decisions in the past and now their answers are "measured," Brown said.

Most economists agree this is not a time of crisis. Asian currency falls are not a threat to the world's economy, Song said.

This story was reported by VOA's Ralph Jennings and adapted for Learning English by Susan Shand. It was edited by Mario Ritter.

currency – n. the money used by a country

contagion – n. a financial crisis that moves from one country to another

converge – v. to all meet together