Update Required To play the media you will need to either update your browser to a recent version or update your Flash plugin.
By Bryan Lynn
17 January 2021

The largest number of influenza cases is in Japan and South Korea. In those countries, 20 million chickens have been destroyed since November.

Outbreaks have been reported over a wide area in Japan during the past two months. Chiba near Tokyo has reported cases and there are reports of the disease more than 1,000 kilometers away on the island of Kyushu. Agriculture ministry officials say fresh cases are still happening. 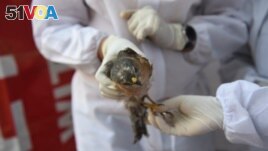 Volunteers wearing Personal Protective Equipment (PPE) as a precaution against the spread of bird flu treat an injured rescued bird at a temporary shelter in Ahmedabad on January 13, 2021. (Photo by SAM PANTHAKY / AFP)

"We can't say risk of the further spread of bird flu has diminished as the migration season for wild birds will continue until March, or even April in some cases," an official told Reuters.

The cases discovered in Japan and South Korea are similar to viruses that spread through Europe in 2019. Those viruses developed from widespread infections in 2014, said Filip Claes. He is an animal diseases expert with the United Nations' Food and Agriculture Organization (FAO).

Bird flu is common in Asia at this time of year because of migratory bird movements. Now, new forms of the virus have evolved to become more deadly in wild birds. This puts countries on flight pathways at risk, experts say.

"This is one of the worst outbreaks ever in India," said Mohinder Oberoi, an animal health expert and former advisor to the FAO. He added that there is a lot of public fear about disease in crows, which can fly long distances. "They know they fly far and think they'll infect their poultry, or even people."

Chicken prices in India fell by almost a third last week as people became increasingly fearful of the disease and stayed away from the meat.

Bird flu cannot infect people who eat the meat and the H5N8 virus is not known to have infected humans. But people are still fearful, said Uddhav Ahire, chairman of Anand Agro Group, a poultry company based in the western Indian city of Nashik.

Indonesia is Asia's second largest poultry producer. The country is only a temporary transit point for wild birds. This has reduced the risk of infections, an official at the country's Agriculture Ministry said.

However, Indonesia still moved to ban live bird imports from countries with H5N8 cases and set up a surveillance system to look for early signs of the virus.

With no major bird flight pathways over Southeast Asia, countries like Vietnam, Laos and Cambodia have so far not had H5N8 outbreaks. Those nations could, however, face risks from the movement of people and goods.

The Asian outbreak comes as the world faces the COVID-19 pandemic. It hurt poultry sales early on. But the pandemic has also driven poultry demand up as more people facing virus restrictions turned to home cooking.

Reuters reported on this story. Bryan Lynn adapted the report for Learning English. Mario Ritter, Jr. was the editor.

outbreak – n. a sudden start or increase in fighting or disease

influenza – n. a common sickness caused by a virus

diminish – v. to cause to become smaller or less important

evolve – v. to change or develop slowly into something that is more complex

poultry – n. the meat of birds (most often describing chicken)

transit – n. related to moving people or things from one place to another