Update Required To play the media you will need to either update your browser to a recent version or update your Flash plugin.
By Jim Dresbach
25 August, 2016


American researchers are making final plans to send a spacecraft into space for a possible meeting with an asteroid.

The spaceship is called OSIRIS-Rex. It is six meters long and shaped like a man's bow tie.

The asteroid is called Bennu. It is larger than the Empire State Building in New York City. Bennu weighs about 60 million tons and is traveling at a speed of more than 100,000 kilometers an hour. 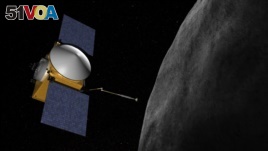 The huge space rock is getting closer to Earth. It comes as close as 500,000 kilometers to the planet every six years.

Researchers want to take a close look at Bennu because it is considered one of the most dangerous asteroids in our solar system.

The American space agency, NASA, will start its investigation next month. NASA officials say the launch window for the spacecraft opens Thursday, September 8. That means the space agency can launch OSIRIS-Rex on that date or later. The plan is to put it in orbit around Bennu in about two years.

The spacecraft will not land on Bennu, but will make contact with the asteroid briefly -- for about five seconds. At that time, a part of the spacecraft shaped like a container will gather about 60 grams from Bennu's surface.

All of that material will return to earth inside a device the researchers are calling the Sample Return Capsule, or SRC. It is expected to land in the Utah desert in September of 2023.

NASA researchers are calling Bennu a "primitive" asteroid – meaning it has been in existence for a long time. Rock particles cover the asteroid's surface. The space agency says some of those particles may "contain the...precursors to the origin of life and the Earth's oceans."

Scientists want to learn as much as possible about Bennu because of the danger it could cause our planet. The asteroid "...has a relatively high probability of impacting the Earth..." in less than 200 years, according to a NASA statement.

Another thing that makes Bennu dangerous is its path around the solar system. That path is changing because of something called the Yarkovsky effect. The Yarkovsky effect is what happens when a cold piece of rock gets close enough to the sun to get heated. Scientists want to know how that warmth changes the orbit of asteroids and other space objects.

Kevin Enochs wrote this story for VOANews. Jim Dresbach adapted his report for Learning English. George Grow was the editor.

What do you think of the NASA project to study the Bennu asteroid? We want to hear from you. Write to us in the Comments Section or visit our 51VOA.COM.

bow tie – n. a narrow length of cloth that is worn by men around the neck and tied into a bow at the throat

precursor – n. something that comes before something else and that often leads to or influences its development