Update Required To play the media you will need to either update your browser to a recent version or update your Flash plugin.
By Anne Ball
12 February, 2017


Astronaut Scott Kelly launched into space on a one-year mission to the International Space Station (ISS) in 2015. He was weightless for 340 days. 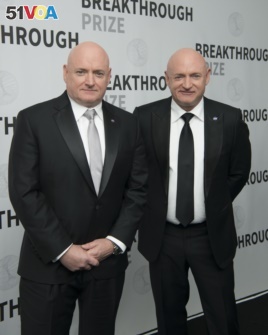 Because they are identical twins, Scott and Mark Kelly share almost all the same genetic material, or DNA. They agreed to let scientists study them before, during, and after Scott's mission to find out what a year floating in space may do to the human body.

The investigation is known as the Twins Study ... and the first results are now in.

In the Twins Study, researchers are looking at 10 aspects of the human body. They are doing the investigation for NASA's Human Research Program. NASA is the American space agency.

They introduced some early findings at a conference in Texas last month. At the conference, researchers said that some genetic changes occurred in Scott Kelly while he was in space.

John Charles is the chief scientist for NASA's Human Research Program. He says researchers expected some of those changes. But there was a surprise: a change to Scott's telomeres.

Telomeres sit on the end of chromosomes. Chromosomes are the part of cells that hold DNA.

Usually, as people age, their telomeres become shorter. But when he was in space, Scott Kelly's telomeres did the opposite: They became longer.

Charles says usually astronauts have shorter telomeres than other people. He thinks this may be because their intense training on Earth is stressful.

So being in space, Charles says, may actually be less stressful.

"They're eating well, they're sleeping – we hope – well, they have work that is meaningful to them. They're exercising, they have two hours everyday for exercise, a luxury many of us on Earth would like but can't afford..."

Scott Kelly's telomeres shortened again when he returned to Earth.

Researchers are also looking at the twin brothers' microbiomes. Those are the microorganisms, mostly "good bacteria," that all humans carry in their intestines to help with digestion. 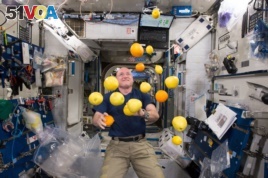 Scott Kelly with lemons in space. Researchers studied how diet affected his microbiome as part of NASA's Twins Study.

Charles says Scott Kelly's microbiomes showed the astronaut was very healthy going into space, and stayed healthy while he was there.

Scientists also compared the two men's bones. They expected Scott to have more bone loss, a known problem connected to weightlessness in space.

Sure enough, Scott's bone formation decreased during the second half of his mission. But over the year, the hormone that helps with bone and muscle health increased.

Researchers say the increase is probably connected to all the exercising Scott did every day to combat the bone and muscle loss.

So, while his bones did change, they may end up being just as strong as before.

The researchers also studied the men's fine motor skills — how their hands and fingers work.

To test the skills, the twins performed tasks with their fingers on a tablet computer screen. The early results show that Scott's accuracy and reaction time may have decreased while he was in space.

As for now, the Twins Study is continuing. NASA's John Charles says the results will give the agency a "new and powerful tool" to prepare astronauts for long space flights, including going to Mars one day.

"If we understand their bodies and how they change in these long duration space missions beyond Earth, then we can better train them, better equip them, better prepare them, better support them for the missions that they are going to undertake."

Charles says the Twins Study will also take mental and emotional factors into account. Because long space flights to and from Mars will mean years away from loved ones on Earth, scientists are studying how to reduce feelings of isolation.

"There is something really to think about as we consider sending people off to long duration missions off to Mars, where they won't have instantaneous communication whenever they feel like it..."

But, Charles says, do not expect answers soon.

"This is a painstaking, tedious process that will only gradually provide the results that we're expecting from this mission. So that, give us a year or so to continue the analysis, and let the investigators talk amongst themselves and talk with our colleagues and make sure they have the right results..."

Then, he says, there might be some surprises when researchers truly understand what happened genetically to Scott Kelly in space and Mark Kelly on the ground.

Anne Ball wrote this story for Learning English with material from Reuters. Kelly Jean Kelly was the editor. We want to hear from you. Write to us in the Comments Section and visit us on 51VOA.COM.

telomeres – n. the items on the end of a chromosome.

stressful – adj. full of or causing stress or making you feel worried or anxious

tedious – adj. boring or too slow or long