Astronomers Get Window Seat for Eclipse

Update Required To play the media you will need to either update your browser to a recent version or update your Flash plugin.
By Dan Friedell
13 March, 2016


An astronomer, TV weatherman and "eclipse chaser" named Joe Rao from New York begged an airline to change its schedule.

He wanted his flight to leave 25 minutes late so he and the other passengers could witness the solar eclipse from the air on March 8 and 9.

Usually airlines try not to delay their flights, but in this case, Alaska Airlines changed plans so a plane full of eclipse fans could see something special. 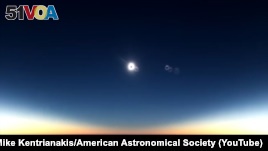 Solar eclipse seen from the window of an Alaska Airlines flight on March 8, 2016.

The Alaska Airlines flight from Alaska to Hawaii on Tuesday afternoon lined up perfectly with the eclipse.

And Mike Kentrianakis of the American Astronomical Society made a video of the moon passing between the sun and the Earth, creating a shadow and a view only seen once in a lifetime.

Kentrianakis was not the only person on the plane excited about the eclipse. One person had seen more than 30 eclipses in his life, according to an Alaska Airlines blog.

The eclipse lasted for about two minutes.

Take a look at Kentrianakis' video.

You can hear the excitement in his voice as the shadow appears.

As he is narrating, his voice cracks with excitement.

At the end of the eclipse, you can hear all the passengers cheering.

Did you miss this eclipse? You still have time to plan for the next total solar eclipse. It will be on August 21, 2017. It will be visible in the U.S., starting in Oregon and ending in South Carolina.

Did you see the eclipse this week? What did you think? Write to us in the Comments Section or on 51VOA.COM.

solar eclipse – n. an occasion when the sun looks like it is completely or partially covered with a dark circle because the moon is between the sun and the Earth

beg – v. to ask (someone) in a very serious and emotional way for something needed or wanted very much

tornado – n. a violent and destructive storm in which powerful winds move around a central point

once in a lifetime – n. a rare event

schedule - n. a list of times for a series of events or actions