Update Required To play the media you will need to either update your browser to a recent version or update your Flash plugin.
By Mario Ritter
15 January, 2019


There is increasing debate over migration in Britain as more asylum seekers arrive on the country's southern coast in small boats.

A small number of migrants usually attempts the crossing from France each year. However, the government says that more than 400 people have tried to cross the 30-kilometer-wide English Channel in the last four months. The government has called it a major problem and has redeployed patrol ships to the Channel from a joint European Union activity in the Mediterranean Sea.

During a visit to the port of Dover recently, Home Secretary Sajid Javid questioned why asylum seekers were coming to Britain. 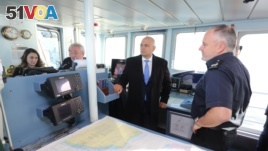 "If you are a genuine asylum seeker then why have you not sought asylum in the first safe country that you arrived in? Because France is not a country where anyone would argue is not safe."

Most of the recent asylum seekers appear to have come from Iran. They are trying to cross in air-filled boats in the middle of winter. The trip is dangerous because the English Channel is one of the world's busiest shipping paths and because of strong tides and currents.

Critics say the number of asylum seekers is still low. They accuse the government of falsely claiming there is a crisis. The government denies this.

Most asylum seekers arrive on airplanes. Many others hide under or inside trucks heading to Britain.

Experts suggest increased security in French ports could be driving migrants to attempt the crossing by sea.

Noorulhadi Oryakheil is from Afghanistan. He fled the Taliban in his country. He came to Britain hidden inside a refrigerated truck three years ago when he was 16 years old.

"That was too cold...," he told VOA. The Afghan said the group he was with ran when the truck driver opened the door, but that police captured them as they were walking on the road.

Bridget Chapman is with the group. She discussed the seriousness of the problem.

"It's a crisis in that people are being forced to put their lives at risk to make a claim for asylum, that's completely unacceptable."

But she said that the number of people crossing the channel was relatively small. She blamed politicians for making migration a political issue.

The government denies such accusations. It says deploying naval ships will help prevent smugglers and migrants from making the dangerous crossing.

Still others say that naval ships will only lead more migrants to make the sea crossing in hopes they will be rescued.

patrol –n. the act of guarding an area, describing something that is used to guard and keep an area safe

tide –n. the regular up or downward movement of the level of the sea

unaccompanied –adj. without another person, alone

smuggler –n. to move people or goods from one country to another illegally or secretly