At Least 50 Dead in Attack on Afghanistan Airport

Update Required To play the media you will need to either update your browser to a recent version or update your Flash plugin.
By VOA
10 December, 2015

The Afghan Defense Ministry said 38 civilians, 10 soldiers and two police officers were killed. The attack on the Kandahar Air Field lasted 20 hours, reported the Washington Post. Among the dead were women and children, the newspaper wrote.

The airport includes a military base with troops from the North Atlantic Treaty Organization, or NATO. There were no reports that NATO troops were killed or injured in the attack. 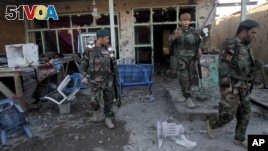 A spokesman for the Taliban says fighters entered the base and attacked local and foreign military troops. He said more than 150 soldiers were killed in the attack. The Taliban often makes claims about the results of their attacks that are not true.

Taliban attacks have grown in number and strength in Afghanistan this year after the withdrawal last year of combat troops from other countries.

This story was reported by Correspondent Ayaz Gul in Islamabad. Christopher Jones-Cruise adapted the story into VOA Learning English. Kathleen Struck was the editor.

base – n. a place where a military force keeps supplies and where people in the military live and work