Update Required To play the media you will need to either update your browser to a recent version or update your Flash plugin.
By Hai Do
30 April 2021


A crowd of people was involved in a stampede at a Jewish religious celebration in northern Israel killing at least 45 people Friday. About 150 people were injured.

Tens of thousands of conservative Jews, known as ultra-Orthodox Jews, attended the event. Officials said the incident was one of the country's deadliest civilian disasters.

Witnesses said the stampede began when large numbers of people tried to go through a narrow path during the event. A video shows people falling on top of each other near the end of a path as they walked down slippery metal steps.

One of the injured people, Avraham Leibe, told Israeli public broadcaster Kan that the crowd could not stop from falling down the steps. He said, "I saw one after the other fall."

The stampede happened during the celebrations of Lag BaOmer at Mount Meron. It was the first mass religious gathering to be held legally since Israel lifted the country's coronavirus restrictions.

Lag BaOmer draws tens of thousands of people. Most of them are ultra-Orthodox Jews. They come each year to honor Rabbi Shimon Bar Yochai, a religious leader who lived about 1,800 years ago and is believed to be buried there. The crowds traditionally light fires, pray and dance as part of the celebrations. 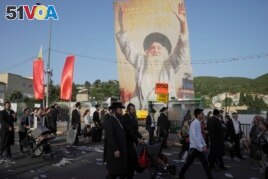 A stampede at a religious festival attended by tens of thousands of ultra-Orthodox Jews in northern Israel killed at least 45 people and injured more than 150 others early Friday. (AP Photo/Sebastian Scheiner)

This year, an estimated 100,000 people attended the event. Israel's Prime Minister Benjamin Netanyahu visited Mount Meron on Friday. He said it was "one of the worst disasters that has befallen the state of Israel." He announced Sunday would be a day of national mourning.

Health and rescue officials said at least 45 people were killed in Friday's stampede. Later in the day, officials were still trying to identify some of the victims and contact families with missing relatives.

Zaki Heller, a spokesman for the rescue service, confirmed that 150 people had been hurt in the stampede, with six hospitalized in very serious condition. He told Israel Army Radio, "in one moment, we went from a happy event to an immense tragedy."

The deadly stampede could also affect the uncertain political situation in Israel.

Netanyahu has so far been unsuccessful in forming a governing coalition. He needs the continued support of ultra-Orthodox political parties. Over the objections of health officials, the prime minister told ultra-Orthodox politicians that the Lag BaOmer celebrations could take place with few limitations.

At this year's celebrations, police had deployed 5,000 extra forces to maintain order. A police spokesman said the crowd on Mount Meron this year was similar to previous years. But some bonfires were divided into smaller areas as a COVID-19 safety measure.

Israeli media suggested that may have created narrow pathways at the celebrations. Last year, observances on Mount Meron were limited and private bonfires were not permitted because of pandemic restrictions.

The Justice Ministry said police were launching an investigation into possible wrongdoing by officers.

stampede –n. when a large group of people (or animals) is frightened or excited and move in a dangerous and uncontrolled way

slippery –adj. difficult to stand on, move on or hold because it is smooth, wet or icy

befall –v. to happen to