Update Required To play the media you will need to either update your browser to a recent version or update your Flash plugin.
By Christopher Jones-Cruise
27 March, 2016

A government official said most of the victims were women and children. He said some of those brought to the hospital were seriously wounded.

The Reuters news agency reported the bomb exploded in a parking area close to the children's playground. Witnesses said Christian families celebrating the Easter holiday were in the park when the attack took place. But it is not clear if the bomber targeted the Christians, who are a minority in Pakistan. 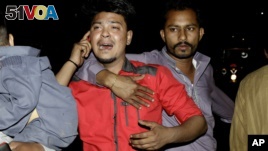 A Pakistani mourns over the death of his relative in a bomb blast, at a local hospital in Lahore, Pakistan, Sunday, March, 27, 2016. A bomb blast in a park in the eastern Pakistani city of Lahore has killed more than 50 people and wounded scores, a health official said. (AP Photo/K.M. Chuadary)

Separately, in Islamabad, thousands of Pakistanis gathered to protest the execution last month of a man who had been charged with killing a provincial governor. Most of the protesters are activist members of Islamic parties.

In 2011, Mumtaz Qadri shot and killed Punjab's governor Salman Taseer. The governor had called for the country's Islamic law against blasphemy to be changed.

Police fired tear gas to try to end the gathering. But the protest continued. The protesters were reported to be trying to reach the parliament building. Witnesses said police had little tear gas left to use on the protesters.

Some of the demonstrators set fires near a public bus service center that links Islamabad with neighboring Rawalpindi.

An Army spokesman said the government had told the military to help control the protesters and protect the area of Islamabad where parliament, the supreme court and other important government buildings and embassies are located.

Correspondent Ayaz Gul reported this story from Islamabad. Christopher Jones-Cruise adapted it for VOA Learning English. Hai Do was the editor.

blasphemy – n. great disrespect shown to God or to something holy

tear gas – n. a gas that makes people unable to see by causing their eyes to be filled with tears and that is used especially by the police or military to separate large groups of people