Update Required To play the media you will need to either update your browser to a recent version or update your Flash plugin.
By Ashley Thompson
22 February, 2018

Hartsfield-Jackson Atlanta International Airport is the busiest airport in the world. With more than 2,500 flights coming and going each day, it serves over 100 million passengers a year.

So what is the latest offering? A nonstop flight to Wakanda.

If you have not heard of Wakanda, you probably have not seen Black Panther, the new superhero movie from Marvel Comics. The film tells the story of an imaginary African nation called Wakanda. It is the home of the Black Panther himself, Prince T'Challa. 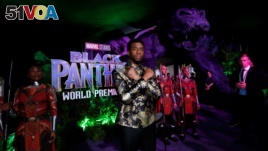 In its opening weekend, Black Panther earned a record-setting $235 million in American theaters. It is the number-one movie in the world.

Black Panther has connections to Atlanta, Georgia; part of it was filmed in the city.

Earlier this week, the Atlanta Airport decided to have some fun. It tweeted a photograph of a departure gate sign that read: "Wakanda. 7:30 p.m." It also wrote, "The bags are packed! #WakandaForever."

In the film, Wakanda is a developed, technologically advanced country. It is both extremely modern and deeply traditional. It has never belonged to a foreign power.

Many Twitter users seemed extremely excited to book a one-way flight to Wakanda.

Some people had questions about the trip, including the food and entertainment available. The Atlanta Airport responded to many of their requests.

Even actor Lupita Nyong'o, who stars in Black Panther, wanted to know what films would be shown en route to Wakanda.

Her movie suggestions were a play on real movie titles, but changed to include Black Panther names and characters.

The airport's idea to announce a fictional flight from Atlanta to Wakanda reportedly came from Atlanta-area chef Darius Williams.

A video on Facebook shows Williams asking an airline employee to help him book a flight from Atlanta to Wakanda. The employee treated him with respect...but was understandably confused!

Ashley Thompson wrote this report based on an Associated Press report and several other sources. George Grow was the editor.

departure - n. the act of leaving a place especially to start a journey

bag n. a container made of thin material (such as paper, plastic, or cloth) that opens at the top and is used for holding or carrying things

packed - adj. used to say that you have finished putting things into bags, boxes, etc.

advanced - adj. far along in a course of progress or development

entertainment - n. amusement or pleasure that comes from watching a performer, playing a game, etc.

en route - adv. on or along the way when you are going to a place

chef - n. a professional cook who usually is in charge of a kitchen in a restaurant