Update Required To play the media you will need to either update your browser to a recent version or update your Flash plugin.
By Carolyn Nicander Mohr
10 May, 2017


Tech(nology) can change the way you look at the world.

Augmented reality and virtual reality are two of the ways that tech can change the way you look at the world. The terms can be confusing. Sometimes people think AR and VR are the same thing.

Augmented reality and virtual reality are increasingly used in technology, so knowing the difference is important.

This picture helps explain the difference between the two. 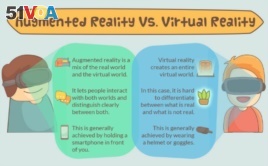 Augmented reality is defined as "an enhanced version of reality created by the use of technology to add digital information on an image of something."

AR is used in apps for smartphones and tablets. AR apps use your phone's camera to show you a view of the real world in front of you, then put a layer of information, including text and/or images, on top of that view.

The Layar app can show you interesting information about places you visit, using augmented reality. Open the app when you are visiting a site and read information that appears in a layer over your view.

You can also find money machines, see real estate for sale, find restaurants, and more using the AR feature of the app. You may even discover new sites you did not know existed.

This video shows you how augmented reality works with the Layar app.

Layar is available free for Android on Google Play and iPhone and iPad at the iTunes App Store.

Virtual Reality is defined as "the use of computer technology to create a simulated environment."

When you view VR, you are viewing a completely different reality than the one in front of you.

Virtual reality may be artificial, such as an animated scene, or an actual place that has been photographed and included in a virtual reality app.

With virtual reality, you can move around and look in every direction -- up, down, sideways and behind you, as if you were physically there.

With virtual reality apps, you can explore places you have never been, such as the surface of Mars, the top of Mt. Everest, or areas deep under the sea. The New York Times has a virtual reality app that lets you experience virtual environments on Earth and other planets.

Check out this video to see how it works.

Have you ever wondered about augmented reality versus virtual reality? Have you tried apps using either one?

enhanced - v. to increase or improve something

simulated - adj. made to look, feel, or behave like something : not real

artificial - adj. not natural or real : made, produced, or done to seem like something natural

animated - adj. produced by the creation of a series of drawings, pictures, etc., that are shown quickly one after another : produced through the process of animation