Update Required To play the media you will need to either update your browser to a recent version or update your Flash plugin.
By Caty Weaver
10 March, 2016


The longtime opposition leader of Myanmar, Aung San Suu Kyi, has apologized for not becoming the country's next president.

She posted a letter on social media to supporters Thursday. She apologized for "not fully fulfilling the people's desire."

Myanmar's parliament began the process of choosing a new president shortly after the posting.

Aung San Suu Kyi asked for continued support "to reach the goal peacefully." Political experts said this is a request for patience and a promise that she will become president one day.

Leader of the National League for Democracy (NLD) party Aung San Suu Kyi, right arrives to participate in a gathering with newly elected lawmakers of NLD on Thursday, March 10, 2016 in Naypyitaw, Myanmar.

Aung San Suu Kyi's National League for Democracy won a large majority seats in parliament in a general election last November. But Myanmar's constitution prevents the NLD leader from taking the presidential office because her sons are foreign citizens.

Later Thursday, the lower house of parliament, controlled by the NLD, chose party member Htin Kyaw as its nominee for vice president. Htin Kyaw is a close adviser to Aung San Suu Kyi. 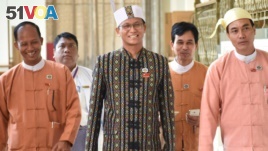 The upper house, also controlled by the NLD, named Henry Van Hti Yu from Chin state as its nominee for vice president.

Twenty-five percent of the Parliament is saved for lawmakers from the military. They are named, not elected. Those members met outside of parliament to choose their nominee for vice president.

Party sources have told VOA that NLD lawmakers will be told to vote for Htin Kyaw as president.

NLD lawmaker Zin Mar Aung said Htin Kyaw would be a good choice for president even though he is not well known. The lawmaker noted that the nominee spent part of his career as a bureaucrat in two ministries.

She told VOA, "He is well experienced in how to run a bureaucratic mechanism. That's perfect."

The military ruled Myanmar for almost 50 years. In 2011, the government became partly civilian. The country held its first general election as a democracy last year. At that time, Aung San Suu Kyi said she would lead the government. She said she would be "above the president."

That almost guarantees Htin Kyaw will be considered a puppet president. NLD lawmakers say the situation is unavoidable because of the constitution. They say it prevents the public favorite from becoming the official leader.

"In that kind of situation, this scenario is the best one to move forward," declared lawmaker Zin Mar Aung.

The new government will take office on April 1.

Do you think Aung San Suu Kyi will someday be president of Myanmar? We want to hear from you! Post your thoughts in the Comments Section or on 51VOA.COM.

patience - n. the ability to wait for a long time without becoming annoyed or upset

bureaucrat – n. a person who is one of the people who run a government or big company and who does everything according to the rules of that government or company