Update Required To play the media you will need to either update your browser to a recent version or update your Flash plugin.
By Mario Ritter
22 March, 2016


Democracy leader Aung San Suu Kyi has been nominated to become a member of the cabinet Myanmar's president-elect, Htin Kyaw.

The Nobel Peace Prize-winner's name was on a list of proposed ministers announced Tuesday by the speaker of parliament. The list has Aung San Suu Kyi's name next to four posts -- minister of the president's office, foreign affairs, energy and education.

If she takes the post of foreign minister, she would have to give up her seat in parliament and leadership of the National League for Democracy party, or NLD. She led the party to a landslide victory in last November's parliamentary elections. The election ended fifty years of complete or partial military rule. 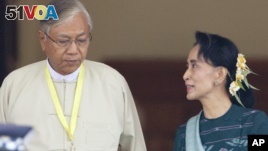 Aung San Suu Kyi has declared she will keep power over president Htin Kyaw. He is her handpicked president and a lifelong friend and confidant.

It is unclear if Aung San Suu Kyi will accept a position in the Cabinet.

Maung Zarni is an activist and a researcher at the London School for Economics. He told VOA that he welcomes the announcement. However, he said the military remains a strong force in the government. He added that it is not in the military's interest to permit the NLD to carry out many reforms to the political system.

provision –n. a condition put in an agreement or document for a special purpose

confidant –n. someone who is trusted, someone to be confided in