Australia Lost One-Third of its Koalas in Last Three Years

Update Required To play the media you will need to either update your browser to a recent version or update your Flash plugin.
By Jonathan Evans
26 September 2021


The Australian Koala Foundation says Australia has lost about 30 percent of its koalas over the past three years. The non-profit group says drought, wildfires and development projects played a part in the drop in the koala population. They are urging the government to do more to protect the creature's environment.

The group estimated the koala population has dropped to less than 58,000 this year from more than 80,000 in 2018. The biggest decrease was in the state of New South Wales, where the numbers have dropped by 41 percent.

Deborah Tabart leads the Australian Koala Foundation. She called the drop "quite dramatic." 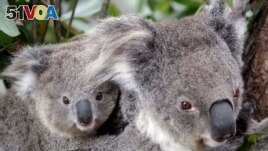 She added, "What we're concerned about is places like western New South Wales where the drought over the last ten years has just had this cumulative effect - river systems completely dry for years, river [red gum plants], which are the lifeblood of koalas, dead."

The loss in New South Wales likely sped up after large forest areas were destroyed by wildfires in late 2019 and early 2020. But some of those areas already had no koalas.

"I think everyone gets it, we've got to change. But if those bulldozers keep working, then I really fear for the koalas," Tabart said.

James Redmayne reported on this story for the Reuters news service. Jonathan Evans adapted this story for Learning English. Caty Weaver was the editor.

cumulative – adj. increasing or becoming better or worse over time through a series of additions

bulldozer – n. a powerful and heavy vehicle that has a large curved piece of metal at its front and that is used for moving dirt and rocks and pushing over trees and other structures