Update Required To play the media you will need to either update your browser to a recent version or update your Flash plugin.
By Dan Novak
22 September 2022

The Bureau of Meteorology said the weather-affecting event known as La Nina is happening for the third straight year and would likely last into next year.

La Nina is produced by currents in the Pacific Ocean. It is known in Australia to produce wet, windy summers. During La Nina, sea surface temperatures in the eastern Pacific Ocean are cooler than normal while waters in the western tropical Pacific are warmer than normal. That situation creates moisture that brings rain to eastern and central Australia. 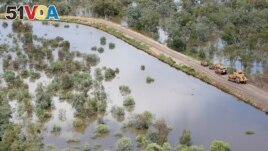 FILE- An aerial view of a road along flooded land caused by La Nina in the town of Goodooga, New South Wales, Australia, January 6, 2011. (REUTERS/Shawn Damian/File)

The weather event was among other reasons that would bring an "80 percent chance of above average rainfall for many parts of the eastern half of Australia," the bureau said in a statement.

The warning affects the country's east coast. Many people in the east are still rebuilding after floods linked to the most recent La Nina conditions, which continued into early 2022.

Extreme weather in Australia brought its worst fires in years in late 2019 and early 2020. That was followed by two La Nina events which pushed rivers beyond their limits and flooded thousands of homes.

Mark Gibbs is a professor with Queensland University of Technology's Institute for Future Environments. He said: "This is not good news for communities, businesses, homeowners, and renters who are living or operating out of buildings and dwellings that are at risk from inundation."

He added that this "may be particularly problematic for those that are still recovering from recent floods, especially in light of the present challenges in securing the services of builders and building suppliers."

moisture — n. amounts of water or liquid that makes something wet

renter –n. a person who pays the owner of property to use it