Update Required To play the media you will need to either update your browser to a recent version or update your Flash plugin.
By VOA
02 January 2020

Military ships and helicopters have begun rescuing thousands of people trapped by the fires.

Fueled by hot weather and high winds, more than 200 fires are now burning across the southeastern states of New South Wales and Victoria. 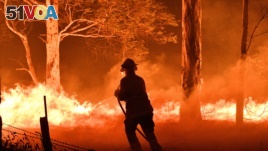 This picture taken on December 31, 2019 shows a firefighter hosing down trees and flying embers in an effort to secure nearby houses from bushfires near the town of Nowra in the Australian state of New South Wales.

Long lines formed outside food stores and fuel stations near high-danger areas. Shelves were emptied of foods like bread and milk as local people and visitors sought supplies to either stay or leave.

More than 50,000 people were reported without electricity. Some affected towns had no available drinking water.

Officials urged evacuation of several towns on Australia's southeast coast, a popular area during the holiday season. The officials warned that extreme heat predicted for the weekend will fuel the fires' growth.

"The priority today is fighting fires and evacuating, getting people to safety," Prime Minister Scott Morrison told reporters in Sydney.

The wildfires have kiiled eight people in the eastern states of New South Wales and Victoria since Monday. Eighteen other people are still missing, officials said Thursday.

Also, a naval ship arrived at the southeastern coastal town of Mallacoota, where 4,000 residents and visitors have been waiting on a beach since Monday night. Naval officers said they would open registration for evacuation Thursday. The ship is expected to make two or three trips in the coming days, state officials said.

‘It is hell on earth'

Michelle Roberts owns a small restaurant in Mallacoota. She told Reuters reporters by phone, "It is hell on earth. It is the worst anybody's ever seen."

Roberts hoped to get her 18-year-old daughter out on the ship to get away from the fires and thick smoke that continue to surround the town.

Five military helicopters were on their way to the south coast to support firefighters' efforts and bring in supplies, the Australian Defense Force said. The aircraft will also be used to evacuate injured, old and young people.

A group of 39 firefighters from North America landed in Melbourne on Friday. Almost 100 U.S. and Canadian experts have traveled to Australia to help deal with the crisis.

The New South Wales state government declared a state of emergency beginning Friday. The declaration gives officials powers to forcibly evacuate people and take control of services. Prime Minister Scott Morrison urged those waiting for help and those stuck in traffic "to be patient ... help will arrive."

The prime minister said the fires will burn for "many, many months ... unlike a flood, where the water will recede, in a fire like this, it goes on and it will continue to go on...until we can get some decent rain."

Bushfires so far this season have destroyed more than 4 million hectares of bushland and more than 1,000 homes.

shelf - n. a flat board which is attached to a wall, frame, etc., and on which objects can be placed

evacuation - n. the act of removing (a person or people) from a dangerous place

recede - v. to move away gradually

decent - adj. good enough but not the best