Australia to Prevent Development of New Coal Mine

Update Required To play the media you will need to either update your browser to a recent version or update your Flash plugin.
By John Russell
05 August 2022


Australia's new government announced recently that it plans to prevent development of a coal mine due to the possible effects on the nearby Great Barrier Reef.

The minority Greens party has been asking the center-left Labor Party government, which was elected in May, to refuse approvals of coal and gas projects. 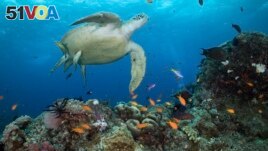 The goal is to help reduce Australia's greenhouse gas emissions.

The mine's supporters have until the middle of August to answer the proposed refusal before the minister makes her final decision.

The Greens welcomed the news and urged the minister to reject another 26 planned coal mines.

Greens leader Adam Bandt said in a statement, "Now we need an across-the-board moratorium on all new coal and gas projects."

A moratorium is a time when an activity is not permitted.

The proposed decision was announced after the House of Representatives passed a bill that would put into law a reduction in Australia's greenhouse gas emissions by 43 percent below 2005 levels by the year 2030.

The previous government's target had been a reduction of between 26 to 28 percent, set at the Paris climate conference in 2015.

Rod McGuirk reported on this story for the Associated Press. John Russell adapted it for VOA Learning English.

stage – n. a particular point or period in the growth or development of something

across-the-board – adj. affecting everyone or everything in a group