Update Required To play the media you will need to either update your browser to a recent version or update your Flash plugin.
By George Grow
29 June, 2017


Police in Australia have charged a top Vatican official with "historic sexual offenses."

Police officials did not give details of the charges against Cardinal George Pell. But they did say the charges are based on claims by more than one person.

Pell has been ordered to appear for a hearing in a Melbourne court on July 18.

The cardinal serves as chief financial adviser to Pope Francis. 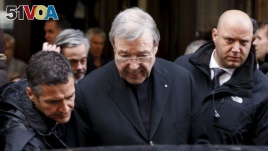 FILE - Australian Cardinal George Pell leaves at the end of a meeting with the victims of sex abuse, at the Quirinale hotel in Rome, Italy, March 3, 2016. (REUTERS/Alessandro Bianchi)

Pell told reporters in Vatican City that he is innocent of the charges. He said the charges are an attack against his character. He added that "The whole idea of sexual abuse is abhorrent to me," and that he is looking forward to having his day in court.

A Vatican spokesman expressed respect for the Australian justice system. He also said that Pope Francis has given Pell a leave of absence -- an extended period of time away from his job.

The Australian cardinal is the highest Roman Catholic clergyman to face charges of sexual abuse.

Sexual abuse in the church first captured the world's attention in 2002. That is when reports about sexually abusive Catholic bishops in the American city of Boston, Massachusetts, began appearing in the news.

The reports found that clergymen would move abusers to new positions in the church instead of dismissing them.

Thousands of cases of sexual abuse have since been reported worldwide. Investigators have urged victims to go public.

The Roman Catholic Church has paid more than $2 billion in compensation to the accusers.

This story first appeared on VOANews.com. George Grow adapted this story for Learning English. Ashley Thompson was the editor.