Update Required To play the media you will need to either update your browser to a recent version or update your Flash plugin.
By Dan Friedell
26 January, 2017

Professional athletes in most sports start to slow down after the age of 35. Some retire.

Jamaican Olympic runner Usain Bolt has talked about retiring, for example. He is only 30 years old.

But on Thursday, Serena Williams earned a spot in the Australian Open finals. She will face her older sister, Venus, who won her semifinal match a day earlier. 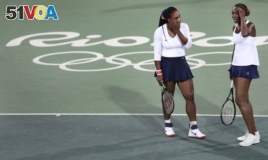 Serena and Venus Williams will play each other in the finals of the Australian Open.

One older champion will play in the men's final, too.

It will be one of the sport's oldest tournament finals in a long time.

Ken Rosewall of Australia is the oldest winner of a Grand Slam. He was 37 when he won the Australian Open in 1972.

Serena Williams is already the oldest winner of a women's Grand Slam tournament. She won Wimbledon last year at the age of 34.

Many people are impressed that three of the finalists are 35 or older.

All of the players have recently had injuries. Federer missed six months due to back and knee injuries. He told the crowd that he did not think he would be able to make it back to a Grand Slam final.

"If I can't walk for another five months, that's okay," he said.

The Williams sisters have had difficulties, too.

Earlier this month, Venus won a match in New Zealand but withdrew from the tournament after hurting her arm. She also learned in 2011 she had the immune system disorder called Sjogren's syndrome. The disorder kept her from practicing and staying in good physical condition for a number of years.

Serena took time off to recover from knee and shoulder injuries after losing in the semifinals of the U.S. Open last September.

It is the ninth time the sisters will face each other in a major tournament finals. Serena has defeated her sister six of those times.

If she wins, Serena will beat Steffi Graff's record for the most Grand Slam titles ever in women's tennis.

Who do you think will win the Australian Open matches? Let us know in the comments section.

Grand Slam – n. an important tournament in tennis or golf, for example, the Australian Open, Wimbledon, or U.S. Open