Update Required To play the media you will need to either update your browser to a recent version or update your Flash plugin.
By Jonathan Evans
28 October, 2017


Indigenous wildlife officials in Australia have found new evidence of one of the country's rarest and most mysterious birds. It is called the night parrot. The bird was thought to be extinct until a sighting in 2013. There have been very few sightings since. But wildlife workers say they have photographed one of the birds in the Kimberley area of Western Australia.

The photograph is unclear: an object colored light green and yellow. But officials believe it suggests evidence of a new population of night parrots. They captured the image using a motion sensor camera in Western Australia's Great Sandy Desert.

Before 2013, scientists did not know what the birds sounded like. But then a night parrot was found in the state of Queensland. 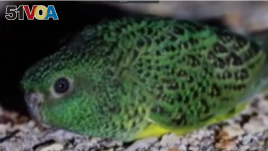 Australia's night parrots were thought to be extinct.

Until recently, the colorful bird had not been seen in Western Australia for more than 100 years. The night parrot lives near the ground and is only active at night. The bird was thought to have died as a result of loss of habitat, fires and attacks by wild cats. The cats threaten the survival of more than 100 species native to Australia. They are thought to have killed off many other birds and smaller mammals.

Alexander Watson is a biologist at the animal conservation group WWF Australia. He has worked with Aboriginal wildlife workers in the Great Sandy Desert of Western Australia. He says it is an extraordinary discovery.

The night parrot is sacred to Australia's native population. Experts say Australia now has a second chance to save a bird that was once thought extinct.

Officials are not telling the public exactly where the recent sightings happened to help protect the birds. Researchers hope that more night parrots will soon be found in other parts of Australia.

survey - v. to look at and examine all parts of something