Update Required To play the media you will need to either update your browser to a recent version or update your Flash plugin.
By Mario Ritter
21 October, 2018


Scientists in Australia want to build what they describe as a "downward looking telescope" to look for mineral wealth under the Earth's surface.

The "telescope" is really a project aimed at increasing understanding of the geology, or physical structure, of Australia.

Scientists want to combine different kinds of geological information and create a three-dimensional (3-D) map of the Earth's interior. Their hope is to show details of rocks and minerals to a depth of at least 300 kilometers under the surface. 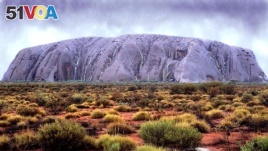 Ayers Rock (Uluru) takes on an unusual color as waterfalls cascade down its' walls in central Australia, Tuesday February 22, 2000 following the worst floods in the area for two decades. The rock which is usually a reddish colour is seldom seen like this.

The Australian Academy of Sciences released details of the project earlier this month. It is part of a 10-year plan for increasing geological science research.

The Academy said in its report that geoscience is very important for Australia's education system and economy.

The plan recognizes the importance of mobile technology, renewable energy and other technologies, like those needed for electric vehicles. Researchers say development of these technologies will lead to a huge increase in demand for some minerals. They include copper, cobalt, gold and what are called rare-earth elements.

Many other important minerals are also believed to exist, hidden beneath Australia.

Sue O'Reilly is with the Australian Academy of Sciences. She described the mapping project this way.

"We can map the geology of the interior of the Earth just like we currently map the surface of the Earth by walking over it and physically looking at the rocks that we see."

O'Reilly said the map will be put together virtually by using powerful computers. When completed, she believes it will help scientists predict where to look for geological formations and mineral resources. O'Reilly said 90 percent of the work will be done with computers and computer modelling of geological processes.

All this information would then be combined with computer and experimental models.

Australian scientists believe that by 2030, worldwide demand for the mineral cobalt will be almost 50 times greater than it was in 2016. They are concerned that if Australia cannot produce enough of the metal for its own industries, the country will face shortages, delays and very high prices.

Cobalt is important to the production of long-lasting batteries that power electronic cars and other devices. It is estimated that about 300 companies around the world are searching for new supplies of cobalt.

The plan provides evidence of the weakness of geoscience studies in Australia's education system, and the need to develop a new generation of scientists.

The Academy also noted the need to "expand Australia's national computing capability" so that the country can continue to develop its geological computer models.

Phil Mercer wrote this story for VOA News. Mario Ritter adapted his story for Learning English with additional information from the Australian Academy of Science report. George Grow was the editor.

dimensional – adj. of or related to a measurement in any one direction

virtually – adv. existing or occurring on computers or the internet

seismic – adj. of, relating to, or caused by earthquakes