Australian Town Has Unusual Plan to Get People to Move There

Update Required To play the media you will need to either update your browser to a recent version or update your Flash plugin.
By John Russell
26 October 2021


The Australian Outback town of Quilpie is home to 800 people.

The town hoped its offer of free land might draw five new families to the community. In less than two weeks, the town has received more than 250 requests for information about the offer from around Australia and other countries around the world.

The town leaders came up with the idea to deal with a housing shortage. The lack of housing made it difficult to fill jobs in the remote area of western Queensland state. 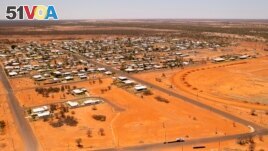 The Australian Outback town of Quilpie is photographed from the air, on Oct. 2, 2021. Quilpie had hoped its offer of a free residential block of land to anyone who would make it their home might attract five new families to the remote community of 800.

A block of land in Quilpie, about 1,000-square meters, sells for around the same amount as the grant. It means the town is effectively giving the land away.

The idea for the grant offer came from Justin Hancock, head of the town council. The 30-year-old spent six months in a retirement home when he first arrived in Quilpie this year because of the area's housing shortage.

Quilpie has recently needed workers in healthcare and education. It also needs people who can fix cars and prepare meat and many other kinds of workers.

Questions about the free land program came from as far away as Britain, India, Hong Kong and New Zealand. But home buyers need to be Australian citizens or permanent residents to be a candidate for the grant.

Hancock said recently that getting five new families to the area would be a big success. "To see the interest," he added, "it was a little overwhelming." The word overwhelming is used to describe something that is very strong, confusing, or difficult to deal with.

Real estate prices have increased greatly across much of Australia throughout the coronavirus crisis. Lockdowns in the largest cities, Sydney and Melbourne, and low interest rates have sent people to search for larger homes in smaller towns.

Most of the interest in coronavirus-free Quilpie has come from the state capital, Brisbane, a city of 2.4 million on the Pacific Ocean 1,000 kilometers to the east. But there is also interest from Melbourne, Newcastle, and Western Australia state.

Both young families and retired people are considering the Quilpie move. They have different reasons.

"People who are coming out of lockdown are saying ‘I want wide open spaces,' and we have plenty of that," Hancock said. The area that Quilpie is in, known as a shire, covers 68,000 square kilometers.

Two grants will be received by Quilpie locals, one by council employee Tom Hennessy, 23, and his 24-year-old school teacher fiancée, Tessa McDougall. The couple bought a block of land in August.

Hennessy was born in Quilpie and his fiancée came a year ago from Brisbane.

Rod McGuirk reported on this story for the Associated Press. John Russell adapted it for Learning English. Hai Do was the editor.

council -- n. a group of people who are chosen to make rules, laws, or decisions about something

plenty – pronoun a large number or amount of something — often + of

fiancée -- n. a woman that a man is engaged to be married to