Update Required To play the media you will need to either update your browser to a recent version or update your Flash plugin.
By Bryan Lynn
02 December, 2016


Austrian voters could elect the European Union's first far-right leader in a presidential election on Sunday.

Norbert Hofer of the far-right Freedom Party is running against Alexander Van der Bellen. Van der Bellen is an independent candidate who led The Greens party earlier. Recent public opinion studies have shown the two candidates with about equal support.

Austria held a presidential election in May. Van der Bellen won that election narrowly. But those results were overturned by Austria's constitutional court because of problems with voting procedures.

Hofer has taken a strong anti-immigration position during his campaign. Earlier in the campaign, he said he might call a referendum on whether Austria should leave the European Union. Hofer also opposes Turkey's efforts to join the EU and has spoken out against EU attempts to get too much control over individual states.

Austrian presidential candidates Alexander Van der Bellen (left), who is running as an independent, and Norbert Hofer, who represents the far-right, pose for photographers before a TV debate in Vienna, Austria, Dec. 1, 2016.

Van der Bellen criticized Hofer for his positions during a recent presidential debate. He said Austria's possible withdrawal from the EU could result in a flood of "right-wing populism."

Van der Bellen has called for continued close relations with Germany, Austria's neighbor to the north and biggest trading partner.

Hofer has said he wants to strengthen relations with other central and eastern European nations, including Russia. He denounced German Chancellor Angela Merkel during a debate.

Hofer said Merkel had caused "serious damage" to Europe by supporting open policies for migrants. He said her actions had allowed hundreds of thousands of migrants to pass through Austria, "including terrorists."

Experts say the presidential campaign in Austria has been heavily influenced by the election of Donald Trump in the United States. President-elect Trump has called for severe immigration enforcement and criticized Merkel's policies on migrants. Political experts say Britain's vote in June to leave the EU – often called Brexit - also drew attention to the immigration issue.

An opinion study by the U.S.-based Gallup organization asked 800 Austrians how Trump's victory might affect the voting. About 53 percent said Trump's win will be better for Hofer, while 9 percent said it will help Van der Bellen.

The office of president in Austria is largely ceremonial. But the president does hold the power to shape policies, appoint and dismiss government ministers and call parliamentary elections.

Some political observers say the outcome in Austria could mark the beginning of a wave of populist candidates across Europe. 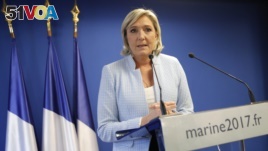 France 2016 US Election: French far-right leader Marine le Pen makes a statement on the presidential election in the United States of America, Wednesday Nov. 9, 2016 in Nanterre, outside Paris. A French outsider with an anti-system agenda, far-right leade

In France, the leader of the far-right National Front, Marine Le Pen, says she believes the Trump and Brexit votes gave her campaign momentum. Le Pen is seen as a possible competitor in France's presidential election next year.

France's Socialist President Francois Hollande has announced he will not run for re-election.

The leaders of right-wing movements in Germany, Italy and the Netherlands are also hoping to gain from Trump's election.

Wilders has repeatedly made statements against Islam. He was also tried for violating a hate speech law and is waiting for the court's decision. A court charged him with inciting hatred after leading a chant at a meeting calling for the Netherlands to accept fewer Moroccan immigrants.

Wilders recently described a worldwide movement that, he says, agrees with his political message and the ideas of other far-right leaders. He says the movement is driven by voters. He says they are tired of "politically correct" ideas from traditional politicians and media companies.

"Brexit proved it. The American election proved it," he said.

Henry Ridgwell and Luis Ramirez reported on this story for VOA News. Bryan Lynn adapted the reports for VOA Learning English, with additional material from the Associated Press, Reuters, and Agence France-Presse. Mario Ritter was the editor.

procedure – n. the official or usual way of doing something

populism – n. related to policies that supposedly represent the opinions of ordinary people

momentum – n. the strength or force allowing something to continue or grow stronger

chant – n. the repeated saying of a word, phrase or slogan by a crowd of people