Update Required To play the media you will need to either update your browser to a recent version or update your Flash plugin.
By Christopher Jones-Cruise
29 August, 2016


American men weigh about seven kilograms more now, on average, than they did 20 years ago.

The United States Centers for Disease Control and Prevention, or CDC, reported the finding earlier this month. 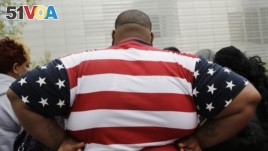 In this Thursday, May 8, 2014 photo, a man wears a shirt patterned after the American flag during a visit to the World Trade Center, in New York.

Over the 20-year period, the average height of men did not change.

The report said American women and children have also gained weight. The average woman weighed 64 kilograms in 1960 and now weighs 76 kilograms. On average, the weight of adolescent boys and girls increased 5.4 kilograms over the past 20 years.

The report did not tell why the average weight of Americans increased. But many studies show a large number of people in the United States are obese. Obesity is a condition in which the body stores large, unhealthy amounts of fat. Obese individuals are considered overweight.

The information for the new report was gathered from 19,000 people. They took part in the National Health and Nutrition Examination Survey from 2011 to 2014.

CDC officials say about 35 percent of Americans are obese. Obesity can cause many health problems, including heart disease, stroke, Type 2 diabetes and some kinds of cancer.

There was some good news from the report. It noted that the rate of weight increase for men appears to be slowing. Since 2002, the average weight of men has increased by just 2.3 kilograms.

Rao told ABC News the rate of increase in weight of American men, women and children "is always a cause for alarm." He said there are some easy ways to prevent weight gain, including choosing water over sugary drinks and taking part in some kind of physical activity every day.

Rao said that people should not worry about each pound they lose, but should instead "think about adopting healthy behaviors that can last a lifetime."

This story was based on a report published on VOANews.com. Christopher Jones-Cruise adapted the report for Learning English. George Grow was the editor.

obese – adj. very fat; fat in a way that is unhealthy

adolescent – adj. describing a young person who is developing into an adult

stroke – n. a serious health diroder caused when a blood vessel in your brain suddenly breaks or is blocked

adopt – v. to begin to use or have something