Update Required To play the media you will need to either update your browser to a recent version or update your Flash plugin.
By Jonathan Evans
11 March 2022


Doctors at Duke University in the American state of North Carolina announced that a baby boy is doing well after a new kind of operation to replace his heart.

The heart transplant operation, doctors said, included special tissue to help prevent rejection of the new organ. The tissue came from another person's thymus gland and was partly grown in a laboratory.

The thymus gland is an organ that plays an important part in the immune system, which fights infection and disease in the human body. Doctors have wondered if implanting thymus tissue that matched a donated organ might help it survive without requiring anti-rejection medicines. Those medicines can have harmful effects on the body. 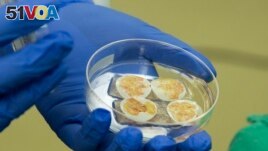 This photo shows thymus tissue for transplant to a pediatric heart patient on Aug. 16, 2021 at Duke University Hospital in Durham, N.C.

Easton Sinnamon of Asheboro, North Carolina received his transplant last summer when he was 6 months old. But Duke University waited to announce the operation until after doctors learned whether the thymus implants were working. They hoped the implants would begin producing immune cells that do not treat the child's new heart like foreign tissue.

After some time, doctors will try taking Easton off the immune-suppressing drugs required after a transplant, said Dr. Joseph Turek. He is Duke University's head of children's heart surgery.

The research is in its very early stages. It is one possible method scientists are testing to produce what is called immune tolerance to a transplant. Turek said, if it works, the method could be tried with other organ transplants, not just the heart.

Easton was a candidate for the experimental transplant because he had two separate health problems. He was born with some heart problems that surgeries right after birth failed to solve. And he suffered repeated infections that doctors realized meant his own thymus was not working correctly.

Some babies are born without a thymus, which helps in development of part of the immune system known as T cells. Duke researchers had been working with Enzyvant Therapeutics to develop implants grown in a laboratory with donated thymus tissue.

In fact, Easton received two operations. First, surgeons implanted his new heart while the donated thymus was sent to a laboratory. About two weeks later, he had a second operation to implant the processed thymus tissue. His own partly working thymus was removed so that new immune cells can develop.

stage –n. a particular point or period in the growth or development of something

tolerance –n. (medical) your body's ability to deal with something (such as a drug) so that its effects are experienced less strongly