Baby Eagles in Washington, DC Get Their Names

Update Required To play the media you will need to either update your browser to a recent version or update your Flash plugin.
By Dan Friedell
27 April, 2016

Freedom and Liberty are not just important ideas in the United States. They are the names of two baby bald eagles in Washington, D.C.

The bald eagle is the national bird of the United States. The birds are not actually bald, as the name suggests. They have white feathers covering their head.

The D.C. Eagle Cam launched in February. Since then, people from 100 countries have watched the website's live stream of the birds over 35-million times. 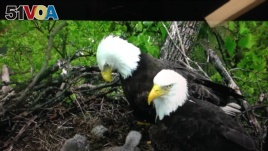 The names, Freedom and Liberty, were chosen after 30,000 suggestions were posted on social media.

One person said he voted for the names Stars and Stripes.

Bald Eagle Cam viewers have seen the babies break open their eggs and grow under the care and supervision of their parents. The adults are named Mr. President and The First Lady.

The baby eagles are about six weeks old. They were named at a ceremony earlier this week in the U.S. National Arboretum.

The babies are expected to leave their home, high on a Tulip Poplar tree, sometime in June, when they will be about 12 weeks old.

The American Eagle Foundation helped to set up the webcam last winter. Students from two universities set up the cameras and connected electrical cables to batteries that are powered by the sun's energy.

The president of the foundation says he hopes the eaglets will grow up, find a partner and return to set up their own nest. He hopes they will raise their babies in Washington, D.C.

On social media, people have been posting comments about the baby birds since they were born.

One person said her father watches the eaglets every day.

Another said, "So awesome to watch them close-up and live!"

Many people said they were "obsessed" with watching the baby eagles.

Have you seen the baby eagles yet? What do you think of them? Write to us in the Comments Section or on 51VOA.COM.

obsess– v. to be the only person or thing that someone thinks or talks about

arboretum – n. a place where trees and plants are grown in order to be studied or seen by the public

bald – adj. having no hair or very little hair on the head