Another Baby Found Alive in Building Ruins in Kenya


Rescue crews in Nairobi have pulled a live baby from the wreckage of an apartment building that collapsed last Friday.

Kenyan officials say the baby girl was found on Tuesday. She has no injuries, but needs food and water. Doctors are treating her for dehydration.

The girl was identified as Dealeryn Saisi Wasike. She is almost six months old. 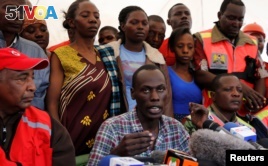 On Monday, a 1-year-old girl was found in the collapsed building. She was also unharmed, but dehydrated.

Rescuers are still searching for other survivors. Officials say 23 people died in the apartment building collapse; 93 others were reported missing.

The building collapsed in Huruma, a crowded but poor neighborhood in Kenya's capital. The building fell down after heavy rains caused flooding and landslides in the area.

Officials had already declared the building unsafe. It was unclear why apartment residents had not left it.

Policed detained the two owners of the building, as well as several government officials, after it collapsed.

Last year, eight buildings in Kenya collapsed. The Architectural Society of Kenya estimates that half the buildings in the country do not meet rules for building safety.

apartment – adj. of or involving a room or several rooms that are part of a building and used as a place to live

dehydration – n. the loss or lack of too much water