Update Required To play the media you will need to either update your browser to a recent version or update your Flash plugin.
By Bryan Lynn
19 May 2022


A baby giraffe born with a leg abnormality has been fitted with special leg braces to help her walk.

The giraffe is named Msituni. She was born on February 1 at the San Diego Zoo Safari Park in California. She suffers from a condition called carpal hypertension. It affected the young animal's front legs, which became hyperextended.

Msituni weighed more than 55 kilograms at birth. The abnormality was putting a lot of pressure on her joints and bones. Zoo workers feared that she could die if they did not quickly correct the condition. This is because it could prevent the giraffe from getting food and from being able to walk around. 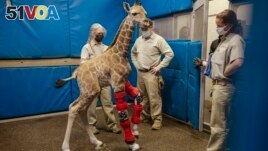 This Feb. 10, 2022, image released by the San Diego Zoo Wildlife Alliance shows Msituni, a giraffe calf born with an unusual disorder that caused her legs to bend the wrong way, at the San Diego Zoo Safari Park in Escondido, north of San Diego.

Zoo officials called in experts to treat the giraffe. The experts were from the Hanger Clinic in Escondido, California. The medical team had a lot of experience fitting people with braces to correct leg problems. But the clinic had never treated an animal before.

Ara Mirzaian was a member of the medical team. He told The Associated Press that, at first, he found the situation "surreal." Mirzaian added that he immediately went online to start learning as much as possible about giraffes.

It is not completely unusual for zoos to seek help from medical professionals who are used to treating people. Earlier this year, a zoo in Tampa, Florida partnered with experts to fit a great hornbill bird suffering from cancer with a new prosthetic beak.

And in 2006, a Hanger Clinic team in Florida created a prosthetic for a dolphin that had lost its tail after getting stuck in ropes from a crab trap. That story was told in the 2011 movie Dolphin Tale.

For Msituni's braces to work, the devices needed to have a wide range of motion. They also needed to be strong and long-lasting. Hanger worked with a company that often makes braces for horses.

The team created models of the giraffe's legs. It took the team about a week to produce the braces, which were made of a material called carbon graphite.

In the end, Msituni only needed one brace. The other leg corrected itself with the help of a temporary prosthetic device.

While the giraffe was sleeping during the fitting operation, Mirzaian was moved by the animal's beauty. He said he had to give her a hug. "It was just amazing seeing such a big, beautiful creature just laying there in front of me," he said.

After 10 days in the special brace, the problem was corrected. In total, Msituni was in braces for 39 days from the day she was born. She stayed in the animal hospital the whole time.

Msituni was then slowly introduced to her mother and the other giraffes. Her mother never took her back. But officials at the park said another female giraffe started looking out for Msituni. They said that she was now able to run with the other giraffes.

Mirzaian said he planned to put up a picture in his office of the baby giraffe wearing her special brace so that the children he treats might be inspired to wear their own braces.

"It was the coolest thing to see an animal like that walk in a brace," he said. "It feels good to know we saved a giraffe's life."

brace – n. something that supports or holds something in the correct position

hyperextend – v. forcefully extend a limb or joint beyond its normal limits

surreal – adj. something that seems strange and not real, like something in a dream

prosthetic – n. an artificial body part, such as an arm, leg, or foot, that replaces a missing part

hug – v. to put your arms around someone and hold them tight