Update Required To play the media you will need to either update your browser to a recent version or update your Flash plugin.
By VOA
14 December, 2018


In the words of comedian James Corden, every so often a song comes along that defines a generation:

Maybe you have not heard the song, but that seems impossible. In 2015, a South Korean educational content maker, Pinkfong, released its first "Baby Shark" video. Later, it broke the internet with a version that mixed animation and two loveable human kids. The video shows them dancing to the story of a shark family, K-pop style. The video has more than 2 billion views on YouTube.

A group called Super Simple also has well-loved versions of the song, and YouTube provides a huge number of other "Baby Shark" offerings to choose from. 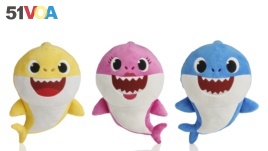 This picture shows the WowWee pinkfong Baby Shark family of singing plush toys. The viral song and its kiddie music videos have entranced toddlers and parents alike, though some of the grown-ups are now suffering from shark fatigue. (AP Photo/WowWee)

And then came #babysharkchallenge. People began to record themselves performing the song and dance, and posting the recordings on social media. Now, stores are selling "Baby Shark" children's clothing, books and toys.

"Our toddler's shark video addiction is a huge issue in our household," said Columbus, Ohio mom Kitty French. She said the song was cute at first but now has become an "earworm" that the adults have tired of.

Not all adults feel that way. Many are continuing to post "Baby Shark"-linked videos of themselves and their children. In one, a little girl urges the electronic assistant Alexa to play her favorite shark song. The girl becomes upset by the smart device's not-so-smart lack of understanding.

In another video, a family in the U.S. state of Texas has designed its Christmas lights to go on and off with the beat of the "Baby Shark" music.

Some parents of special needs kids think "Baby Shark" is more than fun. They argue it has helped their young ones.

Holly Anderson of the U.S. state Utah is a mother of four. Her 3-year-old son has autism, a disorder that can affect social skills, speech and other areas. His therapist uses children's songs on YouTube, including "Baby Shark," to help patients.

Anderson said her son "has a very difficult time staying still, even for a moment, and usually spends his time running around in therapy."

But she said the "Baby Shark" song and video helps her son calm down.

Bob Cunningham is an educator and adviser for the nonprofit Understood.org. The organization supports parents of kids with learning and attention issues. He praised "Baby Shark" as catchy and colorful.

He added, "Both the music and the animation are predictable, with repeated words, phrases, colors and movements."

The combinations can capture and keep children's attention, even for children who have trouble paying attention, Cunningham said. The song and video also occupy most of the senses at the same time and combine language with music and movement. This combination can appeal to kids who struggle with any of those things individually. For example, the movement can support less-developed language, and the music can offer support when movements are difficult, he said.

Corden, host of "The Late Late Show with James Corden," is not the only star to get involved with the baby shark craze. He invited Sophie Turner, Josh Groban and a choir to perform the song on his show.

In addition to being famous, "Baby Shark" sells. A Montreal-based company, WowWee, has a Pinkfong license for North America to sell the shark family in soft toys. The toys sing when pressed in the middle. The online marketplace Amazon took orders for the toys with a guarantee that they would arrive by Christmas. WowWee's chief technology officer, Davin Sufer, said they sold out in less than three days.

Each toy costs just less than $20. Sufer would not say how many were sold. Many of the buyers, however, are now re-selling the toys for more than $100 each on Amazon.

The privately-held WowWee was already in talks with Pinkfong as far back as nearly a year ago when "Baby Shark" truly exploded, said Sufer.

The businessman has three kids of his own. Last summer, his 9-year-old daughter who came home from camp last summer singing the song before she knew his involvement.

He said of the song, "You hear it once or twice and you hear yourself singing, 'doo doo doo doo doo doo.' I could see maybe parents getting a little tired of it, but kids aren't."