'Back to the Future' Celebrates 30 Years


Thirty years ago, Marty McFly and Doc Brown traveled in time "back to the future" in the film "Back to the Future II."

The characters, played by actors Michael J. Fox and Christopher Lloyd, traveled in a time machine from the year 1985 to the year 2015. They landed in Hill Valley on October 21.

The future envisioned in the film has some similarities to the 2015 of today.

Both the technology company Ars Pax and the automobile company Lexus are working on hoverboards, similar to the one used by Marty McFly in the movie. People now make video calls on Skype and FaceTime just like Doc Brown in the movie. 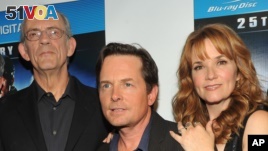 From left, Christopher Lloyd, Michael J. Fox, and Lea Thompson at the Back to the Future 25th Anniversary.

One town in the U.S. state of Virginia is even changing its name. The city of Reston will change its name to Hill Valley, the name of the fictional town featured in the movie. The name change will take place from October 21 to October 25.

Reston will also pay tribute to the film during its yearly film festival. The 5th annual Washington West Film Festival will host a screening of Back to the Future on Sunday, October 25. The actor Christopher Lloyd will attend the screening that night.

Washington West says it will give all the profits from the event to the Michael J. Fox Foundation for Parkinson's Research. Actor Michael J. Fox suffers from Parkinson's disease. Parkinson's is a disease of the central nervous system. It is a progressive disorder, meaning it gets worse over time.

Liz Diemer is the associate director of Team Fox. She says "the Michael J. Fox Foundation remains grateful to the Washington West Film Festival for their support and for their eagerness to join in our efforts to help speed a cure for Parkinson's disease."

Other events scheduled through Sunday include a screening of the three Back to the Future films and a documentary about the cultural impact of the film series.

Jonathan Evans wrote this story for Learning English. Hai Do was the editor.

fictional – adj. something that is not true or real

hoverboard – n. a means of transport resembling a skateboard that travels above the surface of the ground, ridden in a standing position