Update Required To play the media you will need to either update your browser to a recent version or update your Flash plugin.
By Pete Musto
02 January, 2017


Officials in Bahrain are searching for ten escaped prisoners charged with terrorism. The prisoners escaped after armed gunmen attacked Jaw prison, located south of the capital city Manama, on Sunday.

The Bahrain interior ministry described the attack on Twitter. It said the five attackers were part of a "terrorist group" armed with automatic weapons. One police officer was killed in the attack. 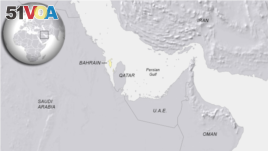 Bahrain is a small island nation off the coast of Saudi Arabia. The country has faced low-level unrest since the 2011 Arab Spring protests. During those protests, crowds took to the streets to demonstrate against their leaders in several Middle Eastern and North African countries.

At that time, Bahrain's Shi'ite Muslim majority and others demanded greater political freedoms from the nation's Sunni Muslim rulers. Shi'ites have argued the Sunni-led monarchy does not treat them fairly. The government denies these claims.

The government began a campaign against protesters in April. Officials arrested several well-known political leaders and forced others into exile. They have also put thousands of people, mostly Shi'ites, into prison for being involved in anti-government activities.

The United States Navy's 5th Fleet has a base on the island. Britain also is opening a naval base there.

We want to hear from you. Has there been any major prison escapes in your country recently? How does your government treat political figures with different opinions? Write to us in the Comments Section or on 51VOA.COM.

automatic – adj. shooting many bullets very quickly when the trigger is pulled

unrest – n. a situation in which many of the people in a country are angry and hold protests or act violently

monarchy – n. a form of government in which a country is ruled by someone who rules for life and usually receives their position from another person when that person dies