Officials of the European Stability Mechanism on Wednesday officially approved the release of $95 billion dollars to Greece. The European Union agency oversees financial help for EU countries. The money will help Greece pay debts to international lenders and support its economy.

On Thursday, Greece used money from the European financial bailout to repay $3.5 billion to the European Central Bank. 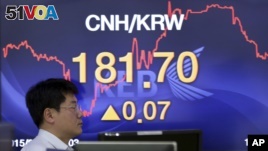 A screen showing the foreign exchange rate between the China and South Korea at a bank in Seoul, South Korea. China's currency recently was devalued as other major trading currencies' exchange rates fell. Thursday, the IMF chose to wait until next year to decide if it would include the yuan as a reserve currency.

Earlier, German lawmakers voted to approve the $95 billion bailout package. Germany is the largest single contributor to Greece's economic bailout. The country's approval of the deal was needed before it could proceed.

Chancellor Angela Merkel's finance minister told lawmakers it would be "irresponsible" not to approve the bailout. He said the package should be approved for the good of Greece and for the European Union.

Finance ministers from countries using the euro approved the first $29 billion payment of the bailout deal on Friday. European countries moved to approve additional money after the Greek parliament approved the deal earlier that day.

The deal permits Greece to continue to be among the 19 countries using the euro.

IMF delayed a decision on China's currency, the yuan

And the International Monetary Fund says it will delay a decision about China's money. The international lender said it would wait a year before deciding if China's money, the yuan, will be used in its group, or basket, of reserve currencies.

Jim Randle reported these stories. Mario Ritter adapted it for Learning English. Hai Do was the editor.

bailout –n. the act of rescuing someone or something

contributor –n. someone or some group that gives in order to make something happen

proceed –v. to move forward; to move ahead

reserve –n. a supply of something (money) stored for use at a later time