Artists Paint the Town in Baltimore

Update Required To play the media you will need to either update your browser to a recent version or update your Flash plugin.
By Caty Weaver
2012-4-26 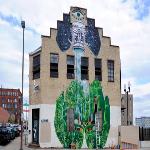 Photo: Martha Cooper
A mural in the Station North area of Baltimore, Maryland

I'm June Simms. This week on our program, we talk to Ben Nichols, lead singer and songwriter for the band Lucero.

We also report about a program to help women newly released from prison ...

But, first, we go to colorful neighborhood in Baltimore, Maryland, that is now home to huge works of street art.

JUNE SIMMS: A neighborhood in Baltimore, Maryland, is getting a beauty treatment. Artists from all over the world have come to the east coast city to paint large, colorful pictures on the outer walls of buildings in Station North. Shirley Griffith has more on the project Open Walls Baltimore.

FREDDIE SAM: "I get to learn about the world through painting art."

He says if he had travelled to Baltimore just as a visitor he would not be able to see the city in the same way. In fact, few tourists visit the Station North neighborhood. It has suffered for many years from difficult economic times and crime.

But Ben Stone hopes the murals will help change things. He is the executive director of North Station Arts and Entertainment District. He says it is easy to get to the area because the main train station is there. There are artists who live and work in the area, art galleries and other businesses. Ben Stone says now that the murals are another reason to visit. Or maybe stay.

BEN STONE: "We are also looking just to increase investment in the area. That could be people wanting to buy homes here, rent homes here; open businesses here."

GAIA: "I wanted to choose people that weren't necessarily the brightest stars, but were doing remarkable work throughout the world."

Like the two person art team Interesni Kazki. Individually, they are known as Oleksii Bordusov and Vladimir Manzhos.

VLADIMIR MANZHOS: "We started from traditional graffiti, letters, and we understand it is not interesting to paint just letters because you cannot tell more than your name."

Gaia painted one mural that uses two walls of a building. It shows a huge hand holding a pretty white bird. The mural got the attention of William, who grew up in Station North.

In all, artists will create more than twenty murals for Open Walls Baltimore. The government and a private bank are providing the money for the project. Station North will hold a celebration for the artists and their work on May twenty-fifth. And the neighborhood of Station North looks even farther ahead to a brighter future.

JUNE SIMMS: Some women's prisons in the United States offer classes for college credit. But when the women gain freedom, they do not have much chance to continue their education. Often, they must follow the terms of a parole period. They live outside prison during that time, but still are under some restrictions. They usually have to find work and a place to live.

But there is a program to help these former prisoners get more education. Barbara Martinsons established the College and Community Fellowship, or CCF, in two thousand.

Ms. Martinsons taught at Manhattan Marymount College in New York City. And she has taught college courses at a New York state women's prison. She believes that women should get higher education. She also believes freed prisoners should continue that education.

CCF provides advice to former prisoners. It also helps them gain admission to college. That process can be very difficult for anyone. It can be even more difficult for a person with a prison record. The group also provides financial aid to members attending college.

Today, CCF Fellows, as members are called, have earned college degrees, including masters' degrees and a doctorate. About seventy percent of those taking part in the program work full time while studying.

Nationally, one in three women who has served in prison returns to jail for crimes. Or, they have violated the terms of their parole. By comparison, almost no CCF fellows go back to jail.

A Christian minister heads CCF. The Reverend Vivian Nixon once spent prison time for falsifying documents. She says the group helps people reclaim the goals they had for their lives before going to jail.

The group holds meetings for the about two hundred seventy people who take part. There are talks about subjects like finance and developing a career, and there is a social hour.

Vivian Nixon says that society in general is happiest when the women do not go back to jail. But she says her greatest hope is that CCF's members are setting high goals for themselves and their children. 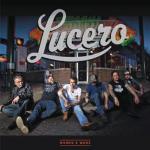 BOB DOUGHTY: That is "Juniper," a favorite song of Lucero musician Ben Nichols. He writes almost all the band's songs and sings them, too. Reporter Caty Weaver talked to Ben Nichols about the craft of song writing.

CATY WEAVER: "How does the process work for you? How do you write a song?"

BEN NICHOLS: "Usually, you've just got a guitar in your hand and you're just kind of noodling, playing around, until you stumble across a chord progression or a guitar lick that sounds nice. Something strikes you and you're like, okay, I'll keep that in mind."

He says he will find a few more chords and a vocal melody that fits. But, he says the words of the song usually come later.

BEN NICHOLS: "A lot of the songs, they'll exist for a long time without lyrics. But there will be a verse, chorus and a bridge, a full structure. But I won't necessarily know what the song's about. I'll just kind of sing nonsense lyrics over it."

Nichols says, in time, the nonsense might lead to a few words he likes.

BEN NICHOLS: "And I'll build around that."

The singer says the song "I Can't Stand to Leave You" was one of the first he wrote for the new album.

BEN NICHOLS: "When you're going on tour all the time it is kind of easy to see where that idea originated; just having to leave home all the time. I call it the saddest song on the record."

Reporter Caty Weaver asked Ben Nichols to identify some of his favorite lines of the album.

BEN NICHOLS: "Well, you mentioned that one from 'On My Way Downtown': Last time we drank I was a little less than behaved. And then the two lines immediately after that. They're not Shakespeare or anything. It's just, Come on out tonight. Oh, I'll be good tonight."

BEN NICHOLS: When I just say the line out loud it doesn't sound like much. But every night when I sing it -- when the music goes one way and the vocals go the other way and whatever that kind of clash there there is. That's where that emotional power comes from."

Another great line from "Women and Work" is in the song "When I Was Young." It goes, Working never did agree with me, or maybe I never stuck around long enough to see.

BEN NICHOLS: "I always wanted to be in a band. There's nothing I would rather do. But when you're actually being paid to do something -- I would pay money to do this. We're just very lucky to be able to do what we do."

We leave you with Lucero performing "Go Easy," from the new album "Women and Work."