Police: ‘Important’ Arrest Made in Bangladesh

Update Required To play the media you will need to either update your browser to a recent version or update your Flash plugin.
By Jim Dresbach
18 June, 2016


Police in Bangladesh have arrested an Islamist militant who is suspected of attacking a publisher last year.

Police described the arrest as an important breakthrough in their investigation of recent violence.

Sumon Hossain Patwari, 20, is accused of being involved with an attack last October on publisher Ahmed Rashid Tutul and two writers. They were shot and stabbed in the office of a publishing house in Dhaka. 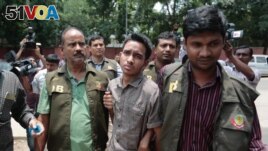 Patwari is a member of the Ansarullah Bangla Team (ABT) militant group, police said. The ABT is banned in Bangladesh.

The head of the police force's anti-terrorism office told reporters Patwari admitted that he hacked Tutul three times during the attack.

Police have arrested thousands of people since Friday because of a series of violent attacks. The victims include bloggers, Christians and Hindus.

The Islamic State militant group has claimed responsibility for more than 20 of the killings.

A Muslim woman also was stabbed and shot dead. She was the wife of an official involved in anti-terrorism operations.

Bangladesh officials continue to state there are no foreign terror groups operating in the country. Instead, they blame home-grown militants and the political opposition for the violence.

This story appeared on VOANews. Jim Dresbach adapted the report for Learning English. George Grow was the editor.

breakthrough – n. an important discovery that happens after trying for a long time to understand or explain something

hack – v. to cut someone many times and usually in a rough and violent way