Update Required To play the media you will need to either update your browser to a recent version or update your Flash plugin.
By Andrew Smith
10 November 2022

But, environmentalists say there are cleaner sources of energy the country should use instead of burning coal.

The station will produce about 1,300 megawatts of power, as much as Bangladesh's largest coal power plant produces. 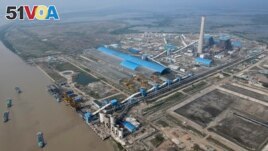 About 12,000 tons of coal will be shipped by boat through the mangrove forest, called the Sundarbans, each day.

Sundarbans means "beautiful forest" in Bengali. The coastal area of trees developed over thousands of years. The Ganga, Brahmaputra, and Meghna rivers flow through the area, rich with sediment that helps the forest grow.

Some environmentalists, scientists and people who live in the area worry that pollution from the new factory will damage the Sundarbans ecosystem.

Bangladesh is home to 168 million people and is one of the most densely populated countries in the world. Because the land is low and flat, it is easily damaged by storms and sea level rise. Last month, a major storm killed 24 people and left 10,000 people homeless.

Bangladesh is one of the lowest-emitting nations in the world. Its government says it plans to reduce its total emissions 22 percent by 2030.

In October, around 80 percent of the country experienced an 8-hour-long blackout when the electric power grid collapsed. Such failures, sometimes for as long as 10 hours a day, are especially damaging to industry in the country.

Tawfiq-e-Elahi Chowdhury, an energy advisor to the Bangladesh Prime Minister, said the new power plant will help the country deal with its energy problems.

Bangladesh wants poor nations to receive money to help adapt to the damaging effects of a warmer world. A World Bank report estimated that Bangladesh could suffer $570 million in damage each year from climate change-related extreme weather events.

Other sources of power

Bangladesh has two active coal-fueled powered plants. Some experts say the country does not need a third. They argue that cleaner power sources are available.

Saleemul Huq is director of the International Centre for Climate Change and Development, a research organization in Dhaka, the Bangladeshi capital.

"Bangladesh has actually got one of the fastest growing solar home systems," he said. Wind power, he added, is another technology Bangladesh could use.

Anu Mohammad is an economist and environmental activist based in Dhaka. He suggested natural gas exploration and production as a less pollutive, better choice than coal.

"The mangrove forests are a natural barrier to the ill effects of climate change," he said, adding: "There are many alternatives to power generation. But there is no alternative to the Sundarbans."

mangrove –n. an area of tropical trees that grow with roots above ground and that grow in swamps or shallow water

blackout –n. a period when all electric power is cut, producing dark conditions at night

sediment –n. material, such as dirt and rocks, that settles at the bottom of a liquid or body of water

grid –n. the network of power lines for the transmission of electricity across a geographical area

solar –adj. relating to the sun

alternative –n. another choice or option