Update Required To play the media you will need to either update your browser to a recent version or update your Flash plugin.
By Marsha James
03 October, 2014


On a hot day, several 12-year-olds are learning to swim at a park in Dhaka, the capital of Bangladesh. It is a rare sight to see an inflatable swimming pool on the grounds of the park.

For the past seven years, local swim instructors have taught about 360,000 children to swim. Many of the boys and girls come from nearby villages.

The swimming program is a service of a non-profit group called the Center for Injury Prevention and Research, Bangladesh. The center says it has taught over 2,700 instructors to obey international swimming guidelines. 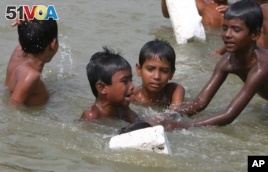 In this file photo, a Bangladeshi boy cries in panic as others help him at a pond at Bashila, outskirts of Dhaka, Bangladesh, Sunday, May. 27, 2007. (AP Photo/Pavel Rahman)
Aminur Rahman is director of the International Drowning Research Center in Dhaka. He remembers one tragedy when a boy attempted to rescue his five-year-old brother from a pond.

"Then the villagers actually tried to search [for] the child and thought that he could be in the pond. So they use fishing net and unfortunately they got both the child from the water. They rescued the child by that time and both of them were dead. It was assumed they went to the pond for washing hands and feet and maybe the younger one may have fallen down in the pond and the older one who knew swimming but didn't know how to rescue others Maybe tried to rescue his younger, but unfortunately he couldn't do [it]. So it is a pity that both children drowned."

Bangladesh sits on one of the world's largest river deltas, above the Bay of Bengal. It is a country of ponds and other waterways.

Dr. Rahman says people often do not think of water as a threat because it is so close to many homes.

"Somebody says, we used to swim here, we go for bathing, washing, everything nothing happened. And sometimes they often say that it's God's will we cannot protect him. If the luck is that he will drown, he'll drown [and we] have nothing to do with that. This kind of misperception actually exists in the community."

Most drowning deaths happen when unsupervised children fall into ponds within 20 meters of their homes.

In recent years, child health has improved in Bangladesh. Deaths from diarrhea and pneumonia have dropped sharply. The two are the largest killers of children in many developing countries. However, there was no reduction in drowning deaths in Bangladesh.

Most drowning victims are from poor, uneducated families in rural areas. Many children walk around nearby fields, roads and ponds on their own.

At a school in Dhaka, 12-year-old Halima Sadia Tina recalled learning to swim.

"Now I can swim. When I went to my village house, I swim in that area and now I can swim better. The children who lived in rural areas they don't know what is kick, float, glide and other systemic way of swimming."

Thirteen-year-old Rezul Islam says learning to kick was the most difficult part.

"The first time I was scared but after some time I became normal with the water. Now I can save myself from drowning and also I can save other children's life."

A paper in the journal Pediatrics reported that in three years of the program, drownings among children between five and nine years old dropped 48 percent.

With each child who grows confident in the water, Bangladesh makes progress against a preventable public health threat.

*This story came from reporter Amy Yee, in Dhaka, Bangladesh. Marsha James wrote it for VOA Learning English. George Grow was the editor.

inflatable – adj. capable of being filled with air

pity - n. a strong feeling of sadness or sympathy for someone or something

glide - v. to move in a smooth way