Update Required To play the media you will need to either update your browser to a recent version or update your Flash plugin.
By Susan Shand
05 November 2021


Adbus Satter lives in Bonnotola in southwestern Bangladesh. The small seaside village was once home to 2,000 people. Most of them were farmers, like Satter.

But rising seas poisoned the soil with salt water. Two major storms in the last two years destroyed the mud barriers that protected the village from the sea.

The effects of global warming are destroying parts of Bangladesh, said Mohammad Shamsuddoha. He is the head of the non-profit Center for Participatory Research Development.

"It's a grave concern for a country like Bangladesh," he said. He added that studies show some 30 million people may be forced to leave the country's coastal communities.

This week, world leaders are gathered in Glasgow Scotland, for a United Nations climate conference. Countries like Bangladesh are pressing for more financial support to deal with the effects of climate change. 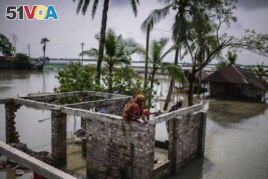 Villagers collect bricks from their house that was destroyed by natural disasters at Pratap Nagar in Satkhira, Bangladesh on Oct. 5, 2021. (AP Photo/Mahmud Hossain Opu)

A long-held promise for rich countries to give poor countries $100 billion each year to move to clean energy and deal with climate change has not been kept. Even the $80 billion that has been given is not enough to make much of a difference.

At Bonbibi Tola village, women gather daily at a well to collect water for cooking and drinking. The women walk up to 4 kilometers to get the water.

But that will soon end. Wells in the area only have fresh water in the months after yearly heavy rains. In the summer, fresh water is difficult to find, said one of the women, Maheswari Halder.

"This is the fate we all surrender to," she said.

The villages lie in Bangladesh's southwestern Shyamnagar area. The area is home to 400,000 people. Officials say the government does not have the money to build desalination factories.

"The area needs maybe 500 desalination plants. But we've only got 50 or so," said Alamgir Kabir, head of a local organization.

Between 2000 and 2009, only six countries in the world were more affected by climate change than Bangladesh. That information comes from the 2021 Climate Change Performance Index, by the nonprofit group Germanwatch.

Bangladesh cannot pay for the costs of climate change on its own.

And it should not have to, says Abdul Kalam Azad. He is the country's special representative to the Climate Vulnerable Forum. The group is made up of countries most at risk from the effects of climate change.

Bangladesh has done far less to damage the Earth's atmosphere than larger industrialized countries. Yet Bangladesh is being badly hurt, Azad said.

In a speech Monday at the U.N. climate meeting, Bangladesh's Prime Minister Sheikh Hasina said the large industrial countries that have caused most climate change should pay for the damage. The 2015 Paris climate agreement said that countries should address "loss and damage" due to climate change."

But countries such as the United States are concerned that they might be held legally responsible for the effects of a century of carbon emissions.

global warming - n. the recent increase in the world's temperature that is believed to be caused by the increase of certain gases (such as carbon dioxide) in the atmosphere

fate - n. the future that someone or something will have

desalination - adj. the removal of salt from sea water

emissions - n. something sent out or given off