Update Required To play the media you will need to either update your browser to a recent version or update your Flash plugin.
By VOA
17 February, 2017

Bao Bao was born in the United States, but she was always destined to go to China.

A giant panda named Mei Xiang gave birth to Bao Bao at Washington's National Zoo in 2013. She was the zoo's first surviving panda cub since 2005.

Visitors got to see Bao Bao for the first time in early 2014. 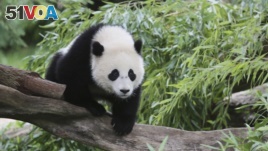 The zoo's first giant pandas arrived in 1972. They were a gift to the United States after President Richard Nixon's historic trip to China.

The U.S. agreement with China states that the cubs of pandas loaned to the National Zoo must go to China by age four.

Zoo officials have a number of events planned for Bao Bao before she travels overseas. For example, she will receive a cake made of ice. Officials say it will recognize the people who give money to the National Zoo to help finance research into animals.

People around the world will be able to watch Bao Bao's final days in Washington on the zoo's Panda cam.

There will be several Facebook Live events, including videos of zookeepers preparing Bao Bao for her trip and a program showing how to make panda-themed art projects.

Bao Bao's final hours at the zoo will be shown on Facebook Live on February 21.

Some of her human friends are using the hashtag #ByeByeBaoBao to say goodbye.

On Twitter, Lisa wrote "I am going to miss Bao Bao so much!! I have met so many people because of her."

The user @CharmCityPanda wrote: "I love you sweet girl – thanks for the joy."

Bao Bao will leave for China next Tuesday on a flight called the Fed Ex "Panda Express."

If you are sad about seeing her go, there are three other pandas at the zoo. You can still see her parents, Mei Xiang and Tian Tian, and her brother, Bei Bei.

Will you send a goodbye wish to Bao Bao? Let us know in the comments section.

destined – adj. certain to achieve or experience something