Update Required To play the media you will need to either update your browser to a recent version or update your Flash plugin.
By Christopher Jones-Cruise
06 January, 2016


The prime minister of Barbados wants Britain's Queen Elizabeth II to be removed as the nation's head of state.

Freundel Stuart says he wants his country to become a parliamentary republic.

A parliamentary republic is a system in which the people choose a legislature, which then chooses the leaders of the government -- the executive branch. In other words, the legislative and executive branches of government are not separate -- as they are in the United States. About 50 countries use this system of governance.

Stuart wants the change to take effect on November 30, 2016 -- the 50th anniversary of his country's independence from Britain. 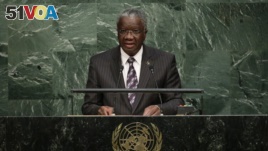 He told a recent meeting of the ruling Democratic Labour Party (DLP) that "it's a little awkward in the year 2015 to still have to stand up and instead of pledging allegiance to Barbados to be pledging allegiance to Her Majesty the Queen." He says it does not make sense for the British monarch to be head of state of an independent country.

The DLP holds a majority of the seats in the House of Assembly, the lower house of the Barbadian parliament. But two-thirds of the House and Senate must agree if a change is to be made to the constitution, which now names the British monarch as head of state. So the prime minister will need to gain the support of the opposition if his plan is to gain approval.

Is there support for the measure?

Barbados historian Trevor Marshall welcomed the prime minister's announcement. He says there is "nothing to be gained" by having a monarch as head of state.

But not all Bajans -- as residents of Barbados are called -- support the change. One person wrote in the comments section of a newspaper that "the people of Barbados don't consider this an important issue now," and don't want the constitution to be changed.

Another commenter said the decision should be made in a referendum -- a direct vote of the people -- not by Parliament. The writer said "it is clear that the prime minister is using his majority in parliament to push through this (change to the) constitution against the wishes of the people by refusing to consult (with) them on the matter."

The Associated Press reports the debate has split older and younger Bajans for many years. The news agency reports "older islanders ... see the queen as a symbol of stability" while many young Bajans see the queen as an anachronism -- a person or thing that seems to belong to the past and does not fit in the present.

Even though the British monarch is the head of state of Barbados, citizens and their representatives have at least partly decided their own laws for hundreds of years. And they have fully decided their laws since all adults were given the right to vote in the early 1950s. Barbados was officially under British rule until 1961 and gained full independence in 1966.

A governor-general named by the queen represents the monarch in Barbados. His or her role is mostly ceremonial. The governor-general is named with the approval of the country's prime minister.

Queen Elizabeth has not been to Barbados for 26 years. When she visits the country, she does so as the Queen of Barbados -- her official title there.

A spokesman for the queen said the decision about becoming a republic "is a matter for the government and people of Barbados."

British explorers discovered Barbados in the early 1600s. Many Caribbean islands have been under the control of the Spanish, British, Dutch and French at different times beginning in the 1600s. But Barbados has remained under British control almost continuously from the time it was discovered by British explorers until gaining independence, so it has closer ties to England than do many of Britain's former colonies.

Barbados is often called "The Jewel of the Caribbean" and "Little England." As in Britain, people drive their cars on the left side of the road. Also like in Britain, the sports of polo and cricket are very popular in Barbados. Many Britons visit Barbados regularly, and many of them own homes there. Large passenger planes full of travelers arrive in Barbados daily from Britain, the United States and many other countries.

The debate about whether the country should become a parliamentary republic is similar to those that have taken place in other countries that were once part of the British empire and retained the queen as their head of state after they gained independence.

Barbados has considered becoming a parliamentary republic since at least the late 1970s. In recent years it has taken steps to create an identity separate from Britain. In 2005, it decided that the Caribbean Court of Justice would be its final court of appeal. Before then, it had used the Privy Council in London as its supreme court. The Council has long served as the high court for many former British colonies.

What's next for Barbados?

Even if Queen Elizabeth is removed as the head of state of Barbados, the country would continue to be a member of the Commonwealth of Nations. The Commonwealth is a group of more than 50 countries, most of which were once British colonies. More than 30 of them are republics. 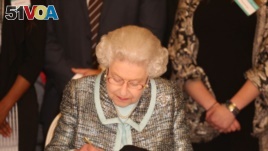 The National Post newspaper says if Barbados removes Elizabeth as head of state, it will become the 16th member of the British Commonwealth to do so since she became queen in 1953. The British monarch is no longer head of state of Pakistan, South Africa and Kenya. The Caribbean nations of Dominica and Trininad became republics in the late 1970s. Fiji did so in 1987. The last country to remove the queen as head of state was Mauritius, in 1992.

For now, the queen remains head of state of 16 countries, including the Caribbean countries of Bahamas, Grenada and St. Vincent and the Grenadines, and Australia, New Zealand, Belize and Canada.

Canada has sometimes considered removing the queen as its head of state. In May, a public opinion study found 39 percent of Canadians asked want the country to become a republic when the queen dies. Fifty-four percent said they did not want Prince Charles to become King of Canada. Prince Charles is the son of Queen Elizabeth.

The National Post newspaper reports that in 1999, 55 percent of voters in Australia rejected a plan for the country to become a republic. And 65 percent of those who voted in a referendum in Tuvalu in 2008 said they wanted the queen to remain their head of state.

Christopher Jones-Cruise reported this story and wrote it for VOA Learning English. Hai Do was the editor.

parliamentary republic – n. a system in which the people choose a legislature, which then chooses the leaders of the government, or executive branch. In this system, the legislative and executive branches of government are not separate, as they are in the United States.

awkward – adj. not easy to deal with; uncomfortable

pledge allegiance to – expression to promise loyalty to a person, country, group, etc.

monarch – n. a person (such as a king or queen) who rules a kingdom or empire

consult – v. to talk about something with (someone) in order to make a decision

symbol – n. an action, object, event, etc., that expresses or represents a particular idea or quality (often + of)

anachronism – n. a person or a thing that seems to belong to the past and not to fit in the present

polo – n. a game played by two teams of four players who ride horses while using long mallets to hit a wooden ball into a goal

cricket – n. a game played on a large field by two teams of 11 players who try to score runs by hitting a small ball with a bat and then running between two sets of wooden sticks

retain – v. to keep (someone) in a position or job