Update Required To play the media you will need to either update your browser to a recent version or update your Flash plugin.
By Dan Friedell
31 March 2021


The Major League Baseball season in the U.S. begins on April 1. The first day of games is known as Opening Day.

For most baseball fans, it is the first time they have been able to see their favorite teams and players since the end of the 2019 season.

In 2020, the season started late, and fans were not permitted to come to games during the COVID-19 pandemic.

By October, some fans could go to games in controlled environments called bubbles. The Los Angeles Dodgers won the season's final game and became champions.

Historically, Opening Day signals the arrival of spring after a long winter. And baseball fans are filled with excitement and optimism. 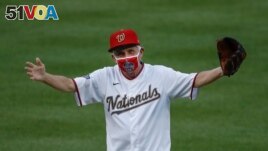 Dr. Anthony Fauci threw out the ceremonial first pitch before the start of an Opening Day baseball game between the New York Yankees and the host Washington Nationals last July.

But this year will be different. Fans are still excited and optimistic, but they are also worried about returning to group events.

The Washington Post conducted a poll of sports fans with the help of the University of Maryland. It found that less than half of Americans would feel comfortable attending a sporting event.

Cities around the U.S. with baseball teams are cutting back the number of fans who can attend. The famous New York Yankees baseball team will let about 10,000 fans attend the games. The fans will need to be vaccinated or tested for the virus.

In Washington, D.C., about 5,000 people will be able to go to games in the first part of the season. They will be required to sit apart from each other and keep their faces covered most of the time.

"I hope that those 5,000, at least at the start who are allowed in, kind of realize how lucky they are just to be there. You know, 35,000 every night at least who would happily trade places with them and deal with the protocols in place."

That is Scott Allen. He is a sports writer for the Washington Post.

The poll from the Washington Post does note, however, that sports fans are more at ease with the idea of attending games today than they were at this time last year. About 65 percent said going to a game in May 2020 was "a large risk." Now that number is down to 26 percent.

One person who is willing to take the risk is a baseball fan named Greg. He was walking with his family outside the Washington Nationals ballpark on Tuesday.

"I'm excited," he said. "I'm taking my dad. I missed sitting in the seats, watching the game and drinking a beer. Just the whole ballpark atmosphere."

There were others, however, who wanted to wait and see how the first part of the season went before going back to the games.

Dan Sullivan was with a friend at a coffee shop near the Washington Nationals home. He said he will wait to be vaccinated before going to a game. He does not mind missing Opening Day.

"I hope the people who are there are going to enjoy it, but most people are not there," he said. Since so few fans are allowed, he does not feel as if he is missing out.

Allen, the Washington Post writer, said even with Opening Day being so different, he thinks fans will see it as a return to normalcy.

"[The baseball season] is way to mark time and important moments in your life. People couldn't do that last year, and I think it hurt them. It feels more like the start of spring and what should be an enjoyable summer when you know that almost every day you're going to be able to turn on the baseball game, or go to see your favorite team."

How do you feel about attending sports events again? Tell us in the Comments Section and visit 51VOA.COM.

bubble –n. a group created during the pandemic that prevents new people from entering

excitement –n. a feeling of eager enthusiasm and interest : the state of being excited

poll –n. an activity in which several or many people are asked a question or a series of questions in order to get information about what most people think about something

protocol –n. a system of rules that explain the correct conduct and procedures to be followed in formal situations

ballpark –n. a term for a baseball stadium