Update Required To play the media you will need to either update your browser to a recent version or update your Flash plugin.
By Dan Friedell
24 October, 2016

The Chicago Cubs and Cleveland Indians will play Game One of the series in Cleveland, Ohio. It has been more than 60 years since either team won the championship of North American baseball.

Chicago Cubs fans have been celebrating since Chicago defeated the Los Angeles Dodgers Saturday night to win the National League.

It is the first World Series berth for the Cubs since 1945. The last time Chicago won the World Series was in 1908. 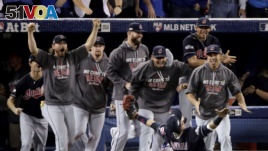 The last time the Indians played in the World Series was 1997.

The last time the Indians won the World Series was in 1948.

The good news for baseball fans? One side has to win.

One famous Cubs fan is presidential candidate Hillary Clinton. She grew up in a community about 20 kilometers northwest of Chicago.

Clinton's campaign posted a photograph of her receiving the news of the team's victory while on an airplane Saturday night.

A video showing the last two outs of the final playoff game and the team's celebration has been played over 7 million times on Facebook.

People in both Chicago and Cleveland are well known for supporting their teams, even when they have losing records. As recently as 2012, each team lost many more games than it won.

To win the World Series, one team must win four games. The first two games are in Cleveland. The average ticket price for the first one is over $3,000.

Game 3 is to be played in Chicago Friday night. Some seats for that game will cost $6,000 or more.

A story from the Chicago Tribune newspaper said this World Series may be the most costly sporting event in recent history.

Major League Baseball is busy publicizing the 2016 World Series. Its Twitter account called the upcoming games "a matchup for the ages."

Will you root for Chicago or Cleveland in the World Series? We want to hear from you. Write to us in the Comments Section or on 51VOA.COM.

berth – n. a place or position on a team

playoffs – n. a series of games that is played after the end of the regular season in order to decide which player or team is the champion — usually plural

fan – n. someone who loves or follows something

ticket – n. a piece of paper that enables the user to see a show or take a trip

for the ages – expression. expected to be remembered for a very long time